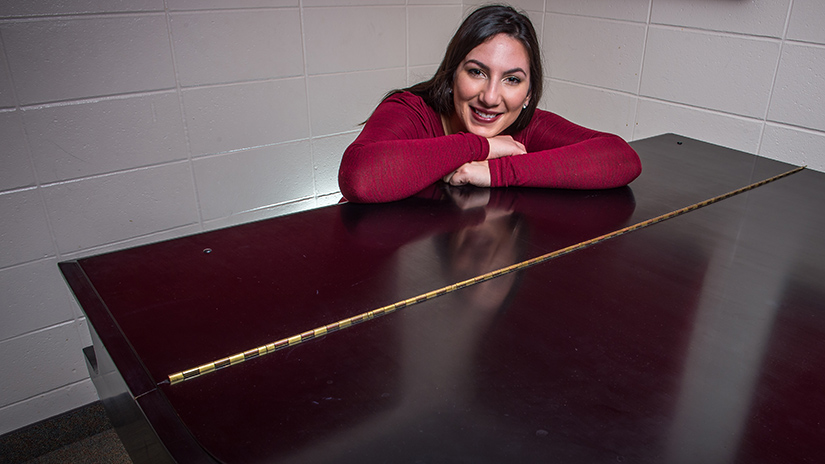 Chelsea Lloyd had a decision to make early in her college career.

“I didn’t start at River Falls. I transferred here from a really good music school, but I was actually a math and statistics major,” she explains. “I actually took some time off school because I really did want to do music, but I wasn’t sure I could make a career out of it. I was very anxious about it because I knew I could get a good job as a statistician.”

“I took some time off and worked for a while and came back to school because I knew I really wanted to do music,” she says.

Her decision to pursue music is paying off for Chelsea. The Spring Valley, Minn., native has been hired as a piano and voice instructor at the Ashland Academy of Music in Mahtomedi, Minn. She began her position in February and has been pulling double duty with work and school during her final semester at the University of Wisconsin-River Falls.

“It’s definitely a dream job. I wanted to teach lessons while I was in college, but I got here and there was so much I wanted to learn as a baseline before I started to teach,” she says. “I’m a performance major but I really do love to teach as well, so I imagine kind of building my life as a lesson teacher and doing gigs.”

“I took an independent study with my piano teacher for pedagogy and as my final, I had to teach a lesson to one of his students. When I finished, he said, ‘I think you did a really good job. I know of this job,’” she recalls. “He connected me and it’s been better than I could have imagined. The person who runs the studio is a River Falls alumna, too, and she’s been a mentor to me as well.”

Despite officially choosing music as her path in college, Chelsea is eager to point out the connections between her two favorite subjects.

“In high school, I didn’t realize how much they are connected but they were both really strong subjects for me. Now I see that there’s such a connection in the way that the brain processes and utilizes math and music,” she explains. “Math is almost like making sense of the world and abstractions with numbers and patterns and music is making sense of noise.”

“People who utilize math and compose and perform music are looking for the same thing:  the truth. Both math and music provide a language for understanding our natural world,” she says. “Take for example a heartbeat. You could map out the heart’s electric impulses graphically like an EKG or you could describe it as a rhythmic figure like a 16th note and accented dotted 8th note.”

But the element that ultimately pulled Chelsea towards music was an intangible.

I think for me, I see it [math] as really useful and practical but the element that it doesn’t have is emotion. Music, though, it has such a great power for people to have an opportunity to express their emotions,” she says. “The thing about music is it takes into account a critical variable in which humans perceive our world – our emotions.”