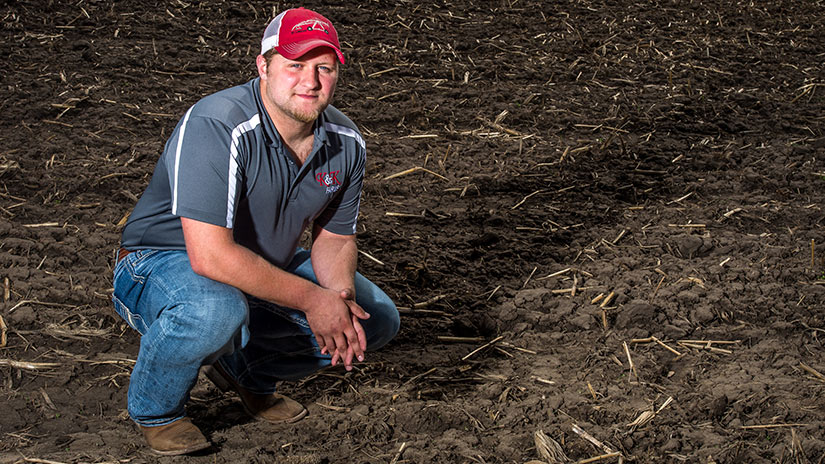 Chase Knutson has known he’d have a job after graduation since he was 12 years old. The Almond, Wis., native is set to graduate from the University of Wisconsin-River Falls this week before heading to a place he’s all too familiar with:  the family farm.

Chase, an agricultural business major, will return to Almond to continue his family’s legacy and serve as farm manager at K & K Farms, a 2,000-acre crop farm. He’ll be the third-generation to join the operation, following in his grandfather’s and father’s footsteps.

“I’ll be a third-generational farmer. We’re starting to get a lot of our rented land back and we also own an irrigation business, so my dad does a lot with that,” he says. “I’ll be the main guy on the farm for my dad. It’s my grandpa’s farm. I’m living in his house, on his farm, running the same ground he did years and years ago.”

“It means a lot. It’s super special. This farm was established in 1956. Running the same tractors and standing on the same dirt my grandpa did is pretty cool,” he adds.

Having picked his path early in life, it would have been easy for Chase to stay put on the farm and not branch out to UW-River Falls. Instead, he chose to attend college and further his education and in turn, he’s confident he’s getting more than just a degree.

“Football was actually the main reason I came to River Falls. I was working on the farm, I didn’t need to go to school,” he recalls. “But those guys – my coaches – keeping me on the team and keeping me here and keeping me working and keeping my focus on school, that was everything for me. They helped me get through it and get my degree.”

“This degree, it’s definitely going to give me an edge.”

That edge, Chase says, has been refined through his classwork at UW-River Falls.

“I always wanted to be the business guy on the farm, I didn’t just want to be in the field. Right now, grain prices are horrible, so you go into this market and you gamble a little bit, but you have to be an educated gambler,” he says. “You have to think about where the price is going to go and try to make the extra penny or dime that other people can’t make in order to make things go ‘round.”

“My commodity marketing classes have been my favorite and will be the most useful. I learned how to market my grain crops,” he explains. “It’s kind of cool because you sit there and you’re trying to make money when it isn’t being made by other people. What I’ve learned here will help me do that.”

Now, with commencement and his return to K & K Farms as a full-time employee quickly approaching, Chase plans to put his education to use in an effort to grow the farm.

“We pretty much started our farm plan last fall. As soon as corn and soybeans come up, we’re starting to think about next year and what our plans are going to be. We’re always watching the prices on what needs to be in the ground and what we need to get locked down for prices,” he explains. “My ultimate goal is to get into potatoes. I’ve been talking with potato contractors trying to get into that.”

While Chase’s excitement about his future at K & K Farms is palpable, his respect for family tradition is just as evident.

“I was ready for it two years ago,” he says with a smile. “My little brothers are at home right now, doing a bunch of farming and I’m ready to get home and get started with them. I think both of them love being on the farm too. My little brother is coming here [to UW-River Falls] this fall so I think we’ve started a bit of a tradition.”

“I don’t know where my brothers will eventually end up, but I know my heart’s set on the farm,” he says.

There’s one important detail, though, that shouldn’t be missed, according to Chase.

“I’m going home to work on my dad and grandpa’s farm, not mine,” he says. “It’s not mine ‘til it makes it to the next generation.”