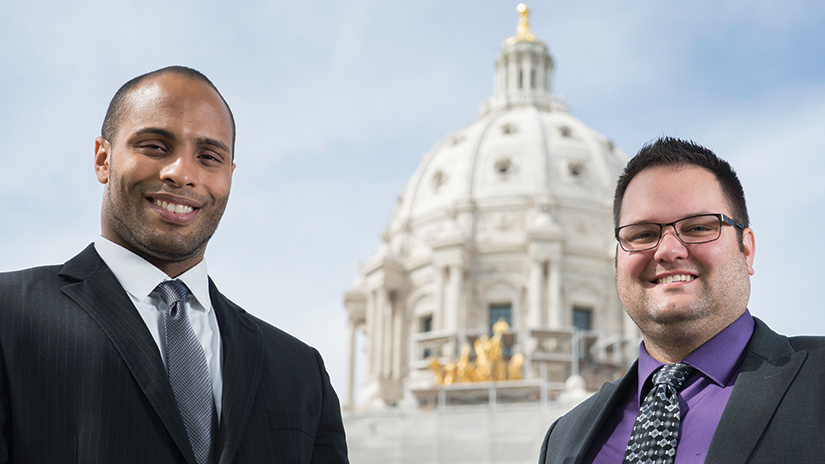 Looking back on his time at UW-River Falls, Isaac said his memories of connecting with faculty stood out most.

“The River Falls experience is exemplified by your ability to access faculty. At larger schools, students don’t get the one-on-one attention that River Falls offers. The interactive experience of questioning your professor is unlike gaining knowledge from reading,” said Isaac.

“As the DFL took over the majority, Senator Metzen regained a chairmanship which left an opening on his staff. I interviewed for the position and was offered the job,” Isaac said.

Isaac and Adam both participated in the McNair Scholars Program, which encourages students to prepare for graduate school, and it was at graduate school where Adam made connections with the Minnesota State Capitol.

“I had the opportunity to intern in Governor Dayton’s policy office and I spent the summer and fall working as a field organizer on a Minnesota Senate campaign,” Adam said. “After the election I was brought on in the Senate’s Majority Research Office.”

“I love the fact that every day I learn something new. I get to see firsthand how legislation is made and passed,” said Isaac.

Adam, who as a researcher, works on issues and legislation related to the Senate Judiciary Committee, agrees.

“I see democracy at work every day,” he said.

"The River Falls experience is exemplified by your ability to access faculty. At larger schools, students don't get the one-on-one attention that River Falls offers."