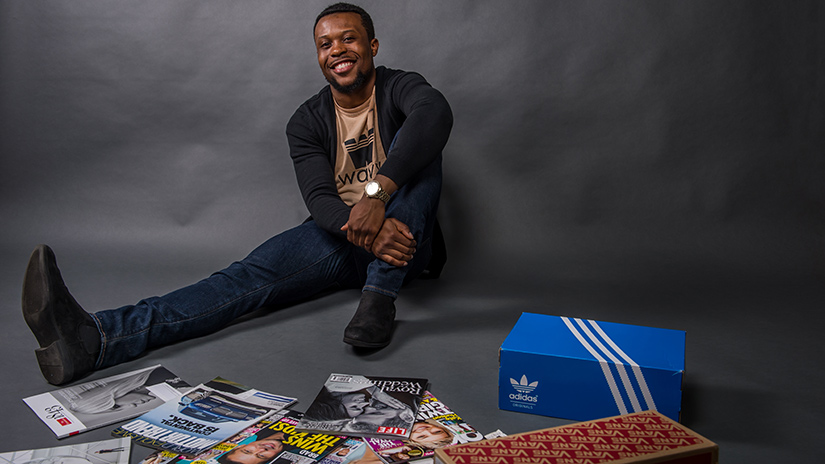 Alfonso Tolbert has a piece of advice for future Falcons.

Four years of hard work as a student at the University of Wisconsin-River Falls is paying off for Alfonso now. He’s set to graduate this week with a degree in marketing communications, but his next stop isn’t too far from UWRF. Beginning June 4, Alfonso, a Rogers, Minn. native, will start his new position as a brand strategy intern at mono, an advertising agency in Minneapolis.

While his title says intern, Alfonso points out that post-grad internships are an industry norm.

“One of the core things that I think not a lot of people know about advertising is kind of the competitive nature to land an internship in an advertising agency. One of the only ways to break into advertising is through their internship programs, which is more like a 90-day training program for most industries,” he says. “It’s really just a different title. The job is really the same. It’s like a new hire that’s been hired and is in a probationary period.”

“This summer I’ll be full time with them, training and learning the ropes and learning industry life. It’s an official hire, it’s just how they shape and name their training program,” he explains. “Every agency has different norms and they want you to get used to that and see if you can find the right fit for you. You really get a great opportunity to grow and learn right off the bat.”

That growth, Alfonso says, will just be a continuation of the experience and knowledge he’s soaked up at UW-River Falls. He feels prepared to move into the professional world now and credits much of that confidence to experiences he’s had on campus, including working in the Office of Student Involvement, forming a campus DECA chapter and, surprisingly, taking philosophy courses.

“Some of the courses that I feel I’m going to pull from the most as a brand strategist are the philosophy courses I’ve taken with Professor [Walter] Wietzke. I think his classes showed me how in-depth human thinking goes and I can draw from that to better understand different individuals and different perspectives,” he says.

His out-of-the-classroom work at UW-River Falls has prepared him for the professional world just as much as his classes, though.

“Working with the Office of Student Involvement has been huge for me in terms of growing as an individual. I’ve worked with Elise Koop, Amy Lloyd and Karyn Wells and those three women have really created a culture of growth in our office that’s propelled a lot of students, not just myself, into the professional world,” he says. “They’ve really created a culture of believing in yourself, taking ownership of your work and self-growth. They help students develop as professionals, so they can succeed after they leave here.”

With his time at UW-River Falls drawing to a close, Alfonso has his sights set squarely on his next step:  the advertising world. His excitement about joining the team at mono is palpable and he says he feels good that he’s found a place where he can flourish.

“The main reason I’m excited to work for mono is their emphasis on cross-discipline. In the advertising industry, one of the norms is that you really stick to the discipline you were hired on for. I was hired as a strategist and in a lot of agencies’ cultures, I would remain in that discipline,” he explains. “If I wanted to switch disciplines, it would take a lot of work and there’s a specific process you have to go through.”

“At mono, I was hired on as a strategist but if I wanted to do creative for a certain brand or do production for a certain brand, as long as I had an idea that was good enough for the client and that they thought would make the overall product that we’re producing for them better, then they have no problem with us switching disciplines,” he continues. “They’re always looking for the best product for the client and for me, for someone that’s been so passionate about the industry for so long, knowing that I’ll be able to explore different disciplines throughout my career makes me very excited.”

But it’s not just the cross-disciplinary approach to advertising that attracted Alfonso to mono. The agency encourages and supports their employees’ passion projects, something that Alfonso can’t wait to explore.

“They [mono] focus so much on people personally, both the people they’re trying to reach with their ads as well as the people that work for them. That’s one of the things that stood out to me so much,” he says. “They support employee’s passion projects, which is something that many creatives or strategists do outside of work to better the community. The fact that mono highlights and supports them stood out to me, it shows where their values align.”

Alfonso plans to take that people-centric approach and apply it to his career. While he has fallen in love with UW-River Falls, a place he doesn’t hesitate to call home now, he’s looking forward to what the future holds for him.

“Down the road I hope to be established in the advertising industry and hope to be involved in passion projects that make a difference for people who look like me – young men of color who are trying to break barriers and break into an industry that’s uncommon,” he says. “I hope in five to ten years I’m doing work that inspires those people.”