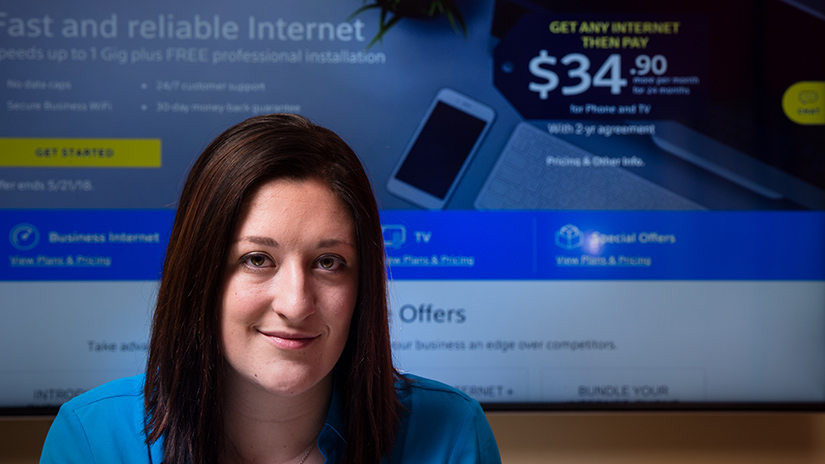 
As a high schooler, Abby Wendt was a quieter soul.

“In high school, I was that person that sat in the back and read the books. I wasn’t really a go-getter, I didn’t have the confidence I have now,” she says. “I never thought of myself in a leadership position.”

Now a graduating senior at the University of Wisconsin-River Falls, Abby, a Green Bay native, is leaving college with more than just a degree – she’s got a new career and a wealth of leadership experience. She’s spent four years serving in the UW-River Falls student government, including her term as president this school year, a position she credits much of her growth to.

“Being a leader teaches you skills you maybe wouldn’t learn. You learn things that apply to your future,” she explains. “Conflict management styles, interpersonal communication, different communication styles – they’re all things I’ve learned from my leadership position. Learning doesn’t stop in the classroom.”

Those skills are transferrable, she says, as they aren’t just useful in her student government role but will be key in her new job. She has accepted a role as a business account executive with Comcast Business in St. Paul starting June 6. A business administration major with an emphasis in marketing sales and a minor in communication, Abby feels confident she’s ready to take on the world of sales.

“I’ve had a lot of classes that will support me going into a sales role. I took a relationship selling class with Dr. [Ozcan] Kilic [professor of management and marketing]. That class was probably what steered me most towards sales,” she says. “I liked the relationship part that you build with the prospect. Ultimately, you’re trying to find their needs and solve them.”

“Dr. Kilic has taught me that a lot of people think of sales in a negative way. People think of a used car salesman, your typical door-to-door salesman, that they try to con you. He [Kilic] taught it in a new light that’s given me a different perspective,” she continues. “He’s taught it in a very ethical way - that we’re doing it for our prospects, not for ourselves. I’ll take that and remember it for the rest of my life. He’s taught it with a public servant mentality - that you’re there for them, trying to help them solve their problem.”

Abby has taken Kilic’s perspective to heart and applied it to her student government role in an effort to leave her best possible mark on UW-River Falls.

“As a person, that’s what I’ve tried to do through my entire presidency – finding problems the university or students might have and trying to solve them. That’s what’s interested me the most,” she says.

“I’m taking confidence away,” she says. “There were opportunities here for people to do things, to step into leadership positions that they wouldn’t have had otherwise. I was able to step into a leadership role because this place was so welcoming. I felt I could do whatever I wanted with my college experience.”

“If I would have written a letter to myself four years ago, I would have told myself to do whatever you want, go to all the clubs you want, make this time yours,” she says. “There’s not a set outline you’re following so don’t be afraid to step outside your box.”