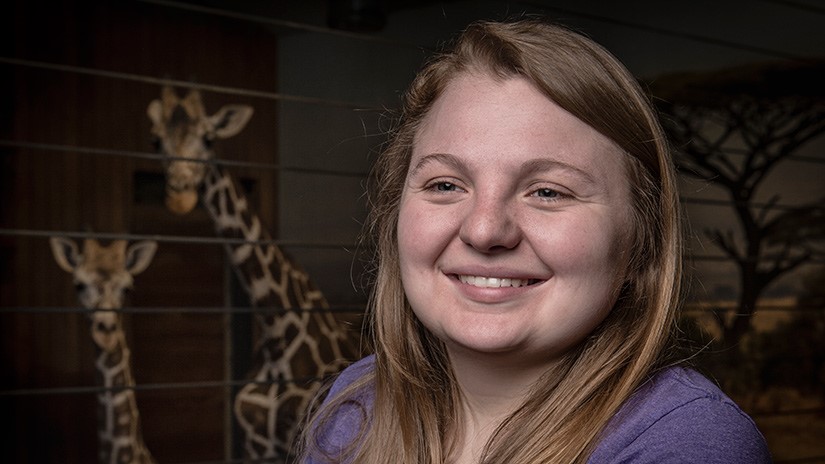 "I have been in love with animals my entire life. I've always wanted to work with them in some manner. My internship experience really solidified what I wanted to spend the rest of my life doing," she says.

Morgan, an animal science major from Rib Lake, Wis., has been hired as a zookeeper with the Wildwood Wildlife Park in Minocqua, Wis. She completed an internship with the same zoo during the summer of 2016 and her experience led to an offer for full-time employment. Morgan credits her UW-River Falls education for helping her land her job.

"My internship supervisors last summer were so surprised at how comfortable I was with the animals," she explains. "That's due to River Falls. The hands-on experience is incredible. It's been the biggest help in preparing me to be a zookeeper. The hands-on learning that we receive is amazing - we have opportunities to experience things like the lab farm. It all helps."

"I had always assumed I would be a veterinarian, but then I realized I wanted to work with animals on a more normal, day-to-day basis, not just when they're sick or in emergency situations," she says. "I've always loved zoos and I decided I wanted to be a zookeeper. Some of my companion animal classes really solidified that. I took a behavior training class where we got to train dogs from the shelter. Working with animals in that manner was the right fit for me."

Morgan admits that people's reactions to hearing her chosen profession are amusing.

"The majority of people are like, 'that's amazing! I wish I could that.' They ask how fun it is to play with all of the animals," she says. "I have to explain that I don't just play with animals. It's actually a lot of hard work. You have to take care of them, visually check them, cleanup after them. You don't get to just sit around and play with them all day. A lot of work goes into being a zookeeper."

Morgan recognizes that UW-River Falls has prepared her for the hard work though.

"This place has given me skills I didn't even realize I would need. Public speaking skills, for instance. Being a zookeeper, you have to be able to speak with the public and educate them about animals. I never realized how well River Falls was preparing me for some of those areas that weren't so obvious to me," she explains.

Morgan is an animal science major and proof that UW-River Falls can prepare for you a wide variety of career fields. She says that despite the fact that her major is pretty broad, she's ready for a more narrow – and unique – path.

"Some people don't even realize that it's a legitimate career path. A lot people say, 'oh I wish I had a job like that! I bet it's so easy to play with animals all day,'" she says, but then laughs. "These are animals. The responsibility is immense. You have to remember they're like children, except they never listen and some could kill you!"