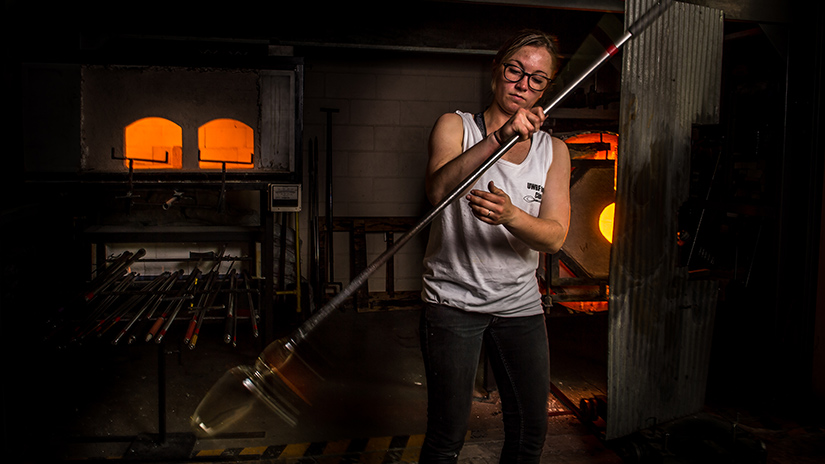 
Taylor Foreman is often faced with the same question when people hear she's an art major.

Taylor, a senior from Bloomington, Minn., came to UW-River Falls with the original intent to pursue a degree in ceramics. After having difficulty getting into class due to the program's popularity, she registered for an Introduction to Glass class, which ended up being her gateway. Now, with graduation nearing, she is preparing to begin her career at Hennepin Made, a Minneapolis-based glass and lighting studio founded by UWRF alumnus Joe Limpert and former UWRF instructor Jackson Schwartz.

During a discussion of her time at UW-River Falls, Taylor explained the trigger to her switch in major emphasis. "Eoin [Breadon] convinced me to change my major that semester. That was not something I expected to be doing."

Breadon is an assistant professor of art at UW-River Falls and according to Taylor, a major reason why she is starting off her life post-graduation with a job already secured.

"He's really great to have here. He brings really excellent networking opportunities to the university. He's worked a lot places and studied around the world. He knows people everywhere and he's very good at getting us connected," she says.

When talking to Taylor, her love of the art form is palpable.

"It's really important to know what you want to make when you start a glass piece. You can't walk away from the piece, you have to be there from start to finish on every piece. It's different than a lot of other media because you can't just go with the flow. My favorite part of glass is that you can get into the flow of the object, but you still have to have a plan. I think that's the most interesting – and it's the most unique part – compared to other forms of art I've worked with," Taylor says.

Her enthusiasm does not wane when asked about her new career.

"A lot of people shy away from doing production work outside of school but I am really interested in developing my technical skills right now," she explains. "I want to build my base and be a part of this company because they really are doing great things there."

As for what she's leaving UW-River Falls with, besides a degree?

"I'm taking a class focused on the business side of art right now. Learning how to think about the marketability of art is incredibly important. It's useful to learn what your art is worth," she says, while also talking about the intangibles she's gained. "Putting myself out there is a big one. I had to be willing to go to events and talk to people and get to know who is in the field. Underclassmen need to remember that. This place [UW-River Falls] isn't just about what you learn in the classroom. I, as an art major, am taking away skills that can back up my answer when people ask me what on earth I'm going to do with an art degree."

"I feel very lucky to have a job secured before graduation. I know it's a testament to the work I've done here and the value of River Falls," Taylor says. "I'm really excited about the road ahead."