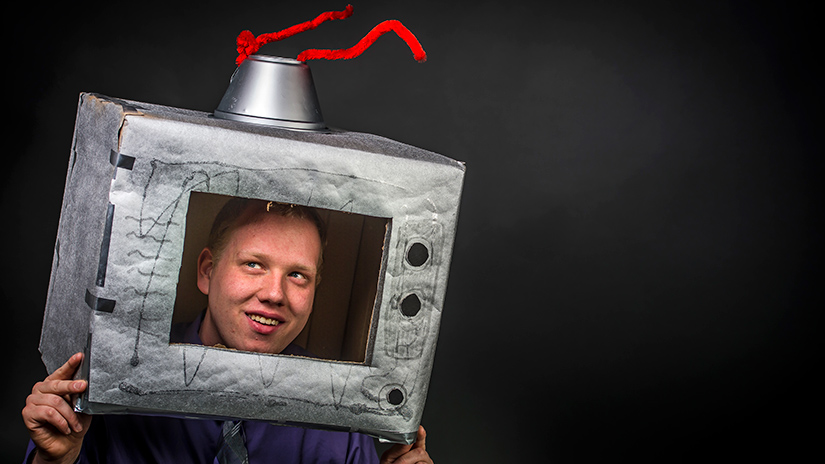 The road to graduation has been a long one for Matthew Clark, figuratively and literally. Matthew has spent the last two years traveling back and forth between the UW-River Falls campus and La Crosse, Wis., to fulfill his duties as a news producer for News 8, a television station based in La Crosse. Now, as his time at UWRF comes to a close, his road is heading in another direction.

A journalism major at UW-River Falls, Matthew has accepted an offer to produce News 3 This Morning, a morning television news program for WISC-TV, a CBS affiliate in Madison, Wis. He has been working at the La Crosse station for two years, having made the jump to weekend producer in the spring of 2016. Now, as he graduates and heads to News 8's sister station, Matthew will be putting what he's practiced into play and he's fully aware of the edge that practice has given him.

"These days it doesn't just take a degree. You have to go get that experience," he explains. "Take what you've learned here [at UWRF] and use it while you're going to school here. You don't have to wait until you have that diploma to start doing what you've learned. You need to hit the ground running right away."

Getting experience under his belt while carrying a full load and commuting has not been easy, but Matthew says it's been worth it.

"It's a two-hour trip each way. It's cost me a lot of gas money," he says with a chuckle. "Sometimes it's challenging. You're struggling to balance work, school, social life. When I go home [to La Crosse], I work about 30 hours in the three days I'm there, so it's going to work all day and running right home to do all my homework. Sometimes you have to say no to your friends because of that."

The juggling hasn't been restricted to the school year. Last summer, Matthew was producing at News 8 while serving as an intern with Wisconsin Public Radio. His extensive experience has served him well, as he fielded multiple offers for employment after graduation.

"In my job, what I will be doing requires certain years of experience. Madison is not an easy market to break into. The bigger the city, the harder it is to get into," he explains. "It seemed crazy that I had more than one offer, but it's all because of that experience."

When considering the amount of journalism experience Matthew has racked up in the last few years, it's almost hard to believe he arrived at UW-River Falls with a different path in mind.
"I didn't come in as a journalism major. I came in as a social work major and got hooked up with the radio station on campus," he says. "I got involved with the station and slowly realized, 'wait a second, this is actually what I want to do with my life.'"

His involvement with WRFW-FM, UWRF's student-run radio station, has had a major influence on Matthew's life, but his initial encounter with the station came with little fanfare.

"I was just walking around the Involvement Fair. Somebody approached me and said, 'Hey, join this!' So I did," he recalls. "I can't say enough about my experience at the station, though. I really can't. I think sometimes it's overlooked, but that station made me who I am. It got me on this path."

He also credits his professors for their role in guiding him toward his new career in Madison.

"Rick Burgsteiner [journalism lecturer and WRFW general manager] has been so influential. We've got a special bond. He's really led me on that path of getting into broadcasting and knowing what to do," he says. "He's talked me through a lot of different scenarios that I've gone through over the years."
While Matthew is ready to put the commuting life behind him and start work in Madison, he recognizes the impact UWRF has had on him and his future.

"Don't tie yourself down to a major. Don't come in thinking, I'm a social work major and that's all I'm going to be," he says. "Be open to different experiences. It's a struggle to go from raising your hand to ask if you can go to the bathroom in high school to being in college and deciding what you want to do with the rest of your life. It's a big leap but don't be discouraged. Take all the opportunities you can."

Those opportunities, Matthew says, are one of UWRF's biggest assets.

"River Falls has provided me with a lot of different opportunities that other universities don't have," he says. "Don't pass them up because you may not get them anywhere else."