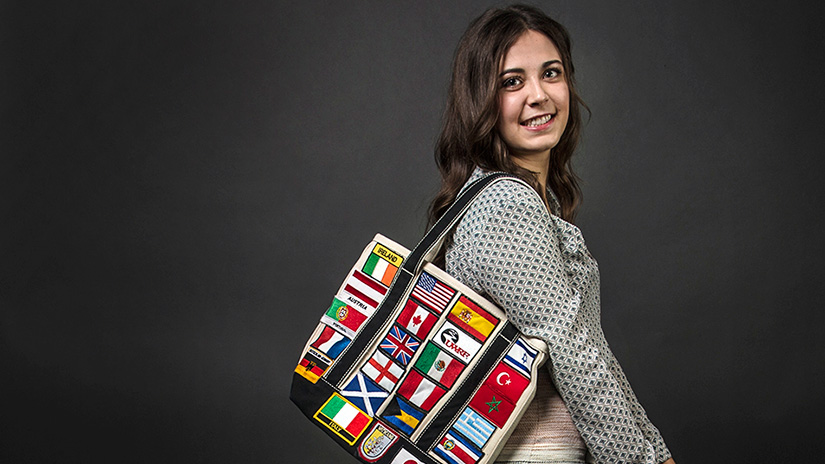 Kaylee Beevers has traveled all over the world. Yet, for her, all roads lead back to her education at UW-River Falls.

A marketing and communications major at the University of Wisconsin-River Falls, Kaylee has transformed her global experiences into marketable skills and will be putting them to use starting this May at TransUnion.

The Spring Valley, Minn. native and world-traveler has been hired before graduation by TransUnion, a global credit-scoring company. She will start with the company in late May but knows that her experiences while a student at UW-River Falls directly contributed to her hiring. In addition to her travels, Kaylee held six internships – some overseas – and knows that the experience she gained as a Falcon is invaluable.

"If it wasn't for stepping out of my comfort zone, going to Japan, going to Israel, learning Spanish from a zero level to an advanced level, if it wasn't for River Falls and those programs, I probably wouldn't have the opportunities I have today," she says. "Having all of this on my resume, it did help me get hired before graduation because if you go out by yourself and go to unique programs and places, that's what allowed me to stand out on a resume and in an interview. The university is really encouraging, no matter what you want to do."

Kaylee's appetite for global travel was sparked during the summer after her freshman year at UW-River Falls. She traveled to Japan as part of the Guy Healy program, followed by stints in Israel and Seville, Spain. She has managed to sprinkle in travel to countries including Germany, Ireland, and Peru over the last four years and each location has left an indelible impression on her.

"First one I did was Guy Healy in Japan. It was the biggest culture shock I've ever had," she says. "The most influential trip was Israel. I went to Israel and worked for a tourist company. I did their photography, social media, some events. I got to travel around and I learned so, so much. It was amazing."

Despite the happy outcome, Kaylee admits UW-River Falls was not on her original list of college choices.

"I didn't know anything about this school and my mom made me do a tour and I remember coming here and leaving the campus after doing my tour and I was almost in tears because I was so happy that I toured here," she recalls. "I cancelled all my applications and just applied here. It definitely has not let me down at all. I've had continuous support from professors. You're not just a number, you're a student and a connection within their life. It's a really good feeling to know it's a home and not just a big place to take classes."

A recurring theme when talking to Kaylee is a global one, and that theme travels back to her initial contact with UW-River Falls.

"One of the things I looked for when applying to college was the study abroad program. The main reason I went to River Falls was because of the global connections office, mostly with Guy Healy because it sounded like a great program," she explains. "They say twice as many students study abroad here than other universities and that was very attractive to me. River Falls made me feel like they cared and they definitely give you the confidence to go and do it.

Kaylee's enthusiasm for both travel abroad and internship experiences is contagious and when talking to her, it's obvious that both topics have had a profound impact on her life.

"Study abroad. It doesn't have to be three different times, just go out and see a new place and see something different. Go there and live the culture, don't just lay on the beach," she says. "It makes you so much more open minded."

"Today in the job world, I always say studying abroad helped me appreciate culture more instead of just looking at the very dominant culture of home and where I've lived," she continues. "I can say I have an appreciation for other cultures. It's what put me up higher on the internship level because you know how to work with different cultures. You appreciate them, you have more creativity and an open mind."

Kaylee's road started with a visit to UW-River Falls, continued across the globe, and has now found its way back to the Midwest. Now, as graduation approaches, she marvels at the path she has taken and the stops along the way.

"In high school I wanted to be a family marriage counselor in the worst way. I was set on majoring in psychology. I didn't think I would be graduating with a marketing degree," she recalls. "The very first day I walked onto campus, I didn't even really know what an internship was. I was just going to get a job and that was it, that's all I knew. I didn't think I'd be where I am today on my first day in River Falls."