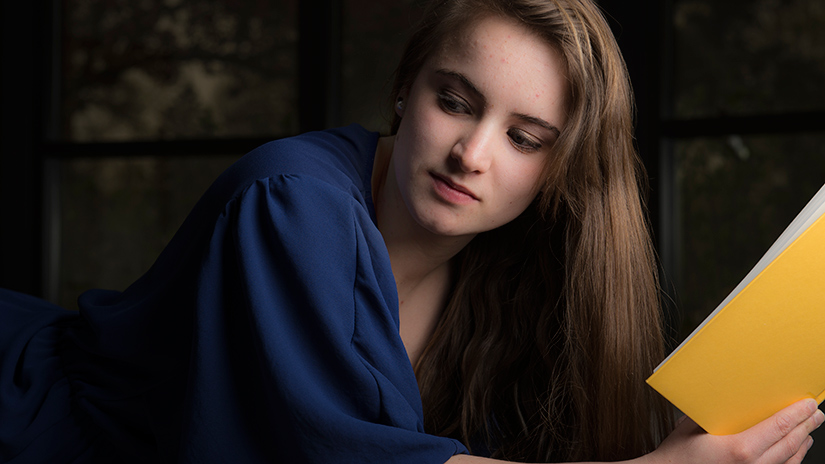 Samantha Hiller, affectionately known as Sammy, is an English literature major lucky enough to snag a job close to her hometown in Olathe, Kan. She will work as a consulting analyst for Cerner in Kansas City, Mo.

"Cerner is a well-known company in the Kansas City Metro Area, which is where I'm from," Hiller said. "I found the job on CareerBuilder and decided to take a chance and apply. After a phone interview, I was flown down over Spring Break to interview, and the following week I was offered a position!"

Read what Sammy had to say about her experience at UWRF

How did UW-River Falls prepare you for your new career?
"UWRF asked me to change my life entirely, to look at the world through a new lens. I came to UWRF to swim and after my freshman year the program was cut. I had to make a decision early on if I was going to commit to this school or look elsewhere. I chose the former. Being in a new state where I didn't know anyone pushed me out of my comfort zone, but UWRF gave me the chance to be a collegiate athlete, to study abroad, to be a resident assistant, and to open my eyes to everything I am capable of. I learned how to adapt to unexpected situations here at UWRF and that's what my new career will be. I will be forced out of my comfort zone quite often and will be expected to relate to people that I could potentially have nothing in common with. UWRF is filled with diverse people who I have had to learn to relate to and that is how UWRF has prepared me for my new career."

While attending UW-River Falls, did you have a particular class, faculty/staff member, or experience that was instrumental to your success?
"There were a few influences here at UWRF that led me to my success. Dr. Hunzer, first and foremost, has been a big support to me since my freshman year. Dr. Hunzer is the reason I have my job in the Dean's Office. She was there when I was overwhelmed and needed a shoulder to lean on; she was there when I thought that I wasn't going to be able to handle the workload ahead of me; and she was there when I had no idea what my future was going to entail. "

"Dr. Toman has also had a large influence on my success. First, he made it possible for me to graduate in three years and was able to help me devise a schedule for my last year and a half so that dream could be a reality. Second of all, in the fall of 2015, I was taking 18 credits, working two jobs, and taking one of Dr. Toman's classes: Contemporary American Literature. It is, to this day, the hardest class I have ever taken. There were times when I thought that I wouldn't be able to do it but Dr. Toman, whether he meant to or not, drove me to give 110 percent more than I already do. He taught me how to push myself and what it means to take the bull by the horns and really give it my all. I was not grateful in the moment for this life experience, but looking back I am extraordinarily grateful because he did teach me a lot."

What one piece of advice would you have for an incoming freshman attending UW-River Falls?
"Get a job and commit to it for at least a year. When graduation rolls around, and it will come faster than you will ever imagine, you're going to want something substantial to put on your resume; furthermore, you're going to want to make yourself marketable. Even if you're only working one weekend a month, you want to prove that you have "real world" experience beyond the classroom."