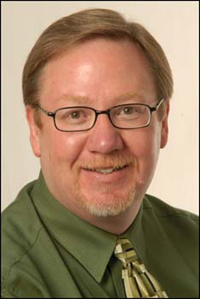 UW-River Falls alumnus and psychology Professor Bradley J. Caskey has been selected the top adviser for the 2004 academic year.

Caskey will be recognized as the fifth recipient of the award at the University's annual awards ceremony April 13. The award was established in 2000 to an outstanding faculty adviser with nominations by graduating seniors and alumni. These nominations are then considered by the Faculty Senate Advising Committee, which makes the final selection.

Students who nominated Caskey for the award noted his enthusiastic and caring style. One said, "He has helped me out more than once when I needed it. He truly cares about his advisees." Another said,"Dr. Caskey assisted me not only with selecting courses but also helped me gain research experience. [He] served as a mentor and encouraged my decision to attend graduate school."

A third student said, "Dr. Caskey shows a sincere interest in helping students proceed toward their graduation. His honesty, helpfulness and advice are all unbeatable." Another student who nominated Caskey said, "Caskey is an excellent teacher. His love and encouragement [for] his students is exceptional."

Hired in 1990, Caskey is currently the psychology department chair at UW-River Falls. Previous positions include assistant professor of psychology at the University of Puget Sound and St. Olaf College.

"I am truly honored to be receiving this award for advising," said Caskey. "In truth, however, this individual distinction is only possible because I am in a department that views advising as a critical element of its mission and am surrounded by superb colleagues who strive to effectively advise every psychology major and minor on the campus."

"Dr. Caskey has consistently demonstrated his concern for and commitment to our students, and was among the first faculty recognized for outstanding advising by the College of Arts and Sciences," said Gorden Hedahl, dean of the college. "There has been universal praise for his caring and personal interactions for both current and past students. It is appropriate that he has been honored for both teaching and advising excellence by the university, and he continues to provide a model for excellence as a faculty member in every area of his work."

He has taught 12 courses, both undergraduate and graduate, for UW-RF. As an adviser, he assists 50-100 students each semester and serves as an independent study research adviser for all psychology majors and minors. He also serves on graduate students' committees. He has mentored two McNair scholars and has been involved in the all-campus minority student mentoring program. He has authored several successful grants for laboratory improvement and developed and administered surveys regarding collaboration efforts across the campus.

He is the author of several instructor's manuals, tests banks and online tutorials for psychology textbooks and curriculum as well as coauthor of the book "Stand!: Contending Ideas and Opinions in Life Span Developmental Psychology." He is currently co-authoring a text on child and adolescent development. His articles have appeared in Applied Psycholinguistics and Child Development, and he has presented professionally at conferences in the United States and Canada.

Caskey, a native of Colby, Wis., is president of the United Way of River Falls and a member of the American Psychology Association Teaching Division, Midwestern Psychological Society and Phi Kappa Phi.