Geology Professor Ian Williams has been named the 2015 Adviser of the Year at the University of Wisconsin-River Falls. Nominations for the award are solicited from graduating seniors and recent alumni, with Faculty Senate Advising Committee making the selection.

Students who nominated Williams noted how much he cares about his students.

"He always looked out for me and pointed how much he cares about his students.

"He always looked out for me and pointed me in a direction that showed my strengths and challenged my weaknesses," one students said. "Overall he pushed me to be a better student, have more confidence in myself."

A second student wrote, " He truly cares about his student's success and will always go above and beyond to help. he is one of the most passionate professors I have ever met and that has inspired me to be a passionate student.

Williams, of River Falls, brought his expertise in Geophysics to UW-River Falls in 1982 and has taught a variety of courses including Structural Geology, Geophysics, Planetary Geology, Environmental Geology and Energy for Sustainable Management--a team-taught course with a faculty member form the Physics Department.

He is an avid traveler, who has not only led many annual regional geology field trips, but has been heavily engaged in the Semester Abroad: Europe, the Wisconsin in Scotland and the International Traveling Classroom (ITC) program. For the ITC Williams taught Geology 101 in the Pyrenees, where he used the mountain chain to put the ideas in Geology 101 to the test. He is preparing to lead Semester Abroad: Europe program again in fall 2015.

His passion for teaching motivated him to be involved with the new faculty orientation and faculty development programs on campus for nearly a decade. In addition to his academic advising, Williams served as the adviser for the River Falls Geological Society for 30 years, turning over the role to a colleague in 2014. He has an ongoing research program with a colleague at the University of Hawaii and they will have a poster describing their interpretation of a geomagnetic Reversal Record at the fall 2015 meeting of the American Geophysical Union in San Francisco and this summers' meeting of the International Union of Geodesy and Geophysics in Prague. 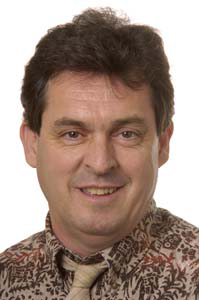