The University of Wisconsin-River Falls is proud to host the Frances Cohler Coffee Concert Series. This unique concert series features performances by UWRF music faculty as well as guest artists from around the world. Concerts, which are held at noon on selected Fridays throughout the academic year, are free and open to the public. The generous donation from Mary Ella Jerome supports this series in honor of her piano duet partner Frances (McNamara) Cohler, who was also a student at the University Wisconsin River Falls in the early 1970s. Donations are accepted through the UWRF Foundation to support this delightful series of quality concerts.

At the conclusion of each concert, coffee and treats are served. Plan some extra time to enjoy our hospitality - and to visit with our faculty and guests. 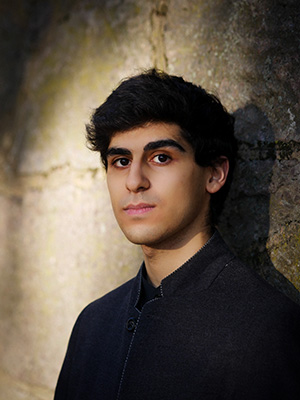 Evren Ozel started piano at age 3 at MacPhail Center for Music in his hometown of Minneapolis, MN. He has performed with orchestras such as the Cleveland Orchestra, Jacksonville Symphony, Minnesota Orchestra, and Boston Pops. He has taken masterclasses from Andras Schiff, Richard Goode, Paul Lewis, and other notable artists. His achievements include scholarships from the U.S. Chopin Foundation and the YoungArts Foundation, first prize at the 2016 Boston Symphony Concerto Competition, second prize at the 2016 Thomas and Evon Cooper International Competition, and second prize as well as the Mozart and Chopin special prizes at the 2018 Dublin International Competition. Most recently, he received the second prize at the 2020 U.S. National Chopin Competition, as well as the special prizes for Best Mazurkas and Best Polonaise.

An avid chamber musician, Ozel has performed as a guest with Jupiter Symphony Chamber Players, and participated in Marlboro Music Festival and ChamberFest Cleveland. Concerts in the 2020-2021 season include solo recitals for the Paderewski Festival in Raleigh, NC, the U.S. Chopin Foundation in Miami, and the Gilmore’s Rising Stars Series in Kalamazoo, MI, as well as an appearance with Wellesley Chamber Players and another appearance with Jupiter Symphony Chamber Players. Ozel previously studied piano with Paul Wirth, theory and composition with Sarah Miller, and conducting with Courtney Lewis. He attended Walnut Hill School for the Arts in Natick, MA and currently studies at New England Conservatory. Since 2014 he has been a student of Wha Kyung Byun.

Click HERE for a full listing of Coffee Concerts from previous semesters.

Health and Safety
The UWRF Music Department will plan on presenting concerts this fall.   We encourage you to wear a mask if you are not vaccinated.   Check websites for changes or contact the department:  715-425-3183 for more information.

For additional information, contact the Music Department at 715-425-3183 or music@uwrf.edu.