Note: Karges Center was razed in May 2018. The new Falcon Center for Health, Education and Wellness hosts the R. A. Karges Auxillary Gymnasium. For more information about the deconstrution of Karges Center, visit https://www.uwrf.edu/News/KargesCenterwallscomedown.cfm. For more information about the Falcon Center, visit https://www.uwrf.edu/FalconCenter/

The Karges Physical Education Center houses the Department of Health and Human Performance. 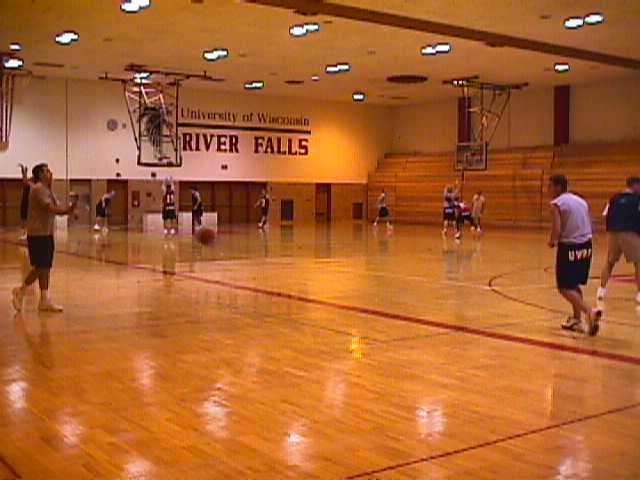 The Karges gymnasium can seat 2,500 spectators for the excitement of men's and women's Falcon basketball and women's volleyball.

The Dance Studio is a 75' x 45' spacious facility with natural lighting and fully equipped to serve as both a state-of-the-art classroom and informal performance space.

As a classroom, the studio is equipped with ballet barres, one wall with full length mirrors, sound system, piano, computer, LCD projector, and full internet access.

Anyone who was on campus in the days when the Falcon basketball team played in the "cracker box" gymnasium of North Hall has one indelible memory of Dr. R. A. Karges. "Kargie" would dash out to the middle of the playing floor at any lull in the game to check the scoreboard.

Karges coached basketball from 1910 to 1912. In those days the school could afford travel for only two conference games and filled out the season by playing area high schools. Karges was a favorite speaker at alumni meetings and once told a group that his teams "had never lost a high school game." Then, with a smile, he added "and never won a college game."

Karges attended Whitewater Normal and then the University of Wisconsin-Madison where he earned his undergraduate degree and was named to Phi Beta Kappa. After graduation, he was principal of Ripon High School. He left there to join the faculty at River Falls in 1908. He was awarded a master's degree at Madison in 1912 and a Ph.D. from the University of Iowa in 1931. Karges taught chemistry at River Falls and was vice president of River Falls State Teachers College from 1926 to 1951. He served as faculty representative to the Wisconsin State Athletic Conference from 1912 until his retirement. He was a familiar figure on campus and attended most of the home football and basketball games. He took part in laying the cornerstone for the Karges Physical Education Center in 1959.

In tribute to him, President E. H. Kleinpell wrote that he "combined in a single personality the most admirable of all attributes of a teacher -- an interest in young people and a concern in their welfare, dedication to a field of learning, a wide range of interests outside his specialty and an intense loyalty to `his' college."