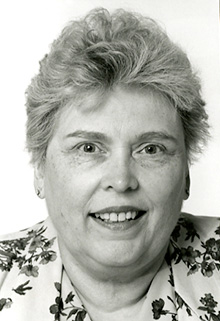 Ila June Brown-Pratt was born in 1940 near Chicago.  She received the B.M.E. in 1962 and the M.M.E. degree in 1966.  She began her studies with an emphasis on trombone, but later switched to voice. From 1962-69 she was the music coordinator for the Bloomington, Illinois, Public Schools.  She also completed three levels of Orff Certification and is well versed in Orff curriculum development.

In 1969 she joined the faculty at UW-RF with half of her position at the Ames Preparatory School on campus and half time in the Music Department.  When the Ames Lab School was closed in 1974, she became a full-time member of the Music Department, specializing in Music Education courses for Elementary Education majors.

Ila June was a close friend of Pat Clark in the Art Department and Carol LeBreck in Physical Education, and with them she created the Interdisciplinary Aesthetic Education Minor, which attempted to overcome the barriers that usually existed between academic disciplines.  She was the M.E.N.C. advisor on campus.  She presented workshops in aesthetic education and interdisciplinary approaches to music, art, and physical education in school systems throughout Minnesota and Wisconsin.   Such interdisciplinary approaches were very new, and Ila June was in great demand as an advisor and clinician.
In 1980, 1991, 1992, and 1993, Ila June received Faculty Renewal Grants for the study and purchasing of instruments for elementary music classrooms. In 1995 she received the Teaching Excellence Award in the College of Arts and Sciences.

The grants she received in the 1990s allowed her to research and travel in the Caribbean and learn of their unique musical traditions and folk instruments.  This was an area that had not been investigated previously.  With Dr. James Pratt from the Department of Speech and Communication, she traveled to San Juan, Puerto Rico, Trinidad, Tobago, and Granada.  When she returned, she gave lectures about her findings in San Antonio, TX and Nashville, TN, as well as the University of Wales in Britain.

Ila June brought back various instruments from these islands and began to use them in her classes as alternatives to the usual instruments used by elementary teachers.  The teachers in the interdisciplinary minor also used the instruments as a way to bridge the various disciplines.

Ila June retired in 2000, and since then has been very busy running an art gallery and shop in downtown River Falls.  Her gallery regularly showcases local artists and gives them an exposure they would otherwise not have.  The receptions at openings are important social events for River Falls.  She brings to a small town an activity that is normally restricted to larger cities like Minneapolis and St. Paul.  She travels to Africa and Central America and brings back items, which are sold, in her shop. She and her husband, Dr. James Pratt, have two sons.