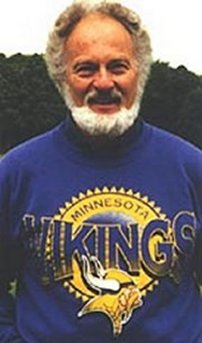 Dr. Cederberg retired in June 1999 after a distinguished teaching career of 33 years at UWRF. After retiring he continued to teach part-time at UWRF (American art history and Colonial history) for several more years.

I have had a gloriously busy year. We went to the Australian open tennis matches in Melbourne. In the Spring I completed work on a NEA grant having to do with WWI jointly shared with the Amery Public library. I continue on the Board of Directors of the JOBS NOW Coalition and Alice and I are still on the YPSCA Board for the Minneapolis Symphony. Our interest in classical music got us drafted into serving on the officers' nominating committee for the Thursday Musical Association.

This Spring semester I will be teaching a course on two thousand years of art images depicting the Virgin Mary at the Osher Center at the University of Minnesota. In June I will be competing at the National Senior Olympics at Louisville. My doubles partner and I qualified by winning the Minnesota gold medal for doubles tennis last September. Now back to work on the Virgin Mary project. Exhausting.

M. A . - University of California-Berkeley

B. A. - University of California-Berkeley