Dr. Smith is truly missed and fondly remembered. Since his retirement, he faithfully attended department events where he contributed to the discussions and enjoyed "catching up" with alumni, friends and colleagues. He also enthusiastically helped with each annual department newsletter by compiling updates from many alumni, colleagues and friends. His joyful and wise presence will be greatly missed.

When I arrived at River Falls, Clyde was in the final stages of recovering from his heart attack. In time, he became a mentor and a friend. He took me to the cafeteria, then in the basement of Hagestad, and introduced me to the faculty at what I thought of as "the table." Quickly I came to know him as a superb storyteller and an analyst. His mind rarely slowed down and he constantly watched for ideas to chew. I remember the shift of his head and the quick lean-in with his piercing eyes when an idea captured his imagination and he wanted to engage with it. That could be a somewhat terrifying moment if the idea was yours. Like good teachers he had the knack of asking the question you did not want to hear and assumed you had the answer. As time went on, the game became just that, and the chase would be on.

As a critic, he was great, he saw the weaknesses but also appreciated the strengths and he worked hard whenever he saw possibility in students and in colleagues. That interest led him to love life and search out the new, but he never left his love of the ancient.

He encouraged and prodded me to finish my book on Coles, looked forward to the work on the Boy Scouts, again wondering when he would get to see some of that. Unfortunately, he only heard about it. But the work is better for his comments.

Clyde was a stickler for logic, crisp and sharp. But he also knew the road could wind and simply needed to be straightened and he would help. He had a theologian's understanding that all people are flawed and had weaknesses and faults. He admitted his own, perhaps more to himself than others. He often saw the best in people even when they frustrated him. That came out with his students. Sometimes it took a bit of prodding on my part to lead a terrified student to ask him for help after a critique of their work. He always responded, most students saw him and their education in a better way. Not surprising that spirit made him a fine preacher. Though I heard him only a couple of times, they were great. His eulogy of Ed Peterson was strong and captured the man he had known so well. More important to me was the eulogy he gave on my father-in-law. He had never met my father-in-law in life but as the good historian he took the words we gave him and wove a true story of his life. My mother-in-law was pleased and, I think, impressed.

I have become old enough to realize how much you learn only late in a relationship. I learned at Ellen's funeral what a fine singing voice he had. I also saw the depth of his faith in the last years. As always in a time like this, one wonders and hopes that you made things clear about how important a person was to your life and how you became who you are.

In Memoriam, The Disciples Divinity House

Memorial gifts may be directed to: 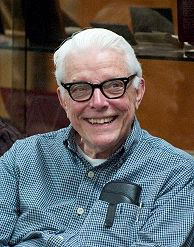