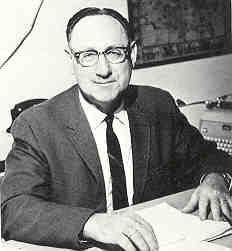 Dr. Walker Wyman was born on Dec, 7, 1907 on a farm in Danville, Illinois. He earned the B.A. degree at Illinois State University and the M.A. and Ph.D. degrees at the University of Iowa. One of his classmates was Blanche Davis, who would go on to become the Chair of the Speech and Theater Department at UWRF. Dr. Wyman joined the UWRF faculty in 1932 to teach "social science." He taught courses in history, geography, political science, and economics. Gradually, as the enrollment of the school grew, they were able to hire a geographer (Dr. John Mosher), a sociologist (Dr. Robert Bailey), an economist (Dr. Dick Darr), and a political scientist (Dr. Robert Berg). And Dr. Wyman became Chairman of the Social Science Department.

By 1962, the Social Science Department had grown so large that it was divided into separate departments, and Dr. Ed Peterson became the first Chairman of the History Department. Dr. Wyman moved to UW-Whitewater, where he was president from l962-67. During this time the student enrollment grew from 3,000 to 8,500 and 20 buildings were started or completed. He felt one of his greatest accomplishments was construction of the campus mall, which was later dedicated to him. At UWRF, Dr. Wyman taught courses in American History, the American Frontier, Local History, Folklore and Historical Research. He helped to create the University Archives, which Dr. King would expand and further develop.

In 1967 he returned to UWRF as Professor Emeritus of U.S. History and Folklore and taught part-time until 1978. He spent much of his time doing research, writing and publishing in the fields of local history and folklore. He said it was in Iowa that he became interested in individual histories, the stories of lumberjacks, ranchers, farmers, migrants and pioneers. He founded the UWRF Press and contributed many manuscripts to it. His 1979 book "Wisconsin Folklore" was based on his UW-Extension radio course that was published weekly in 10 Wisconsin daily and 50 weekly newspapers. He was named that year by Gov. Lee Dreyfus as Wisconsin’s first “Honorary Folklorist.” He was a prolific writer and was the author of works on subjects as varied as water witching, wolf and bear stories, mythical creatures and histories of UW-River Falls and the Wisconsin State University System. Published shortly before his death was his 23rd book, "Great Legends and Stories of Mid-America." "The Lumberjack Frontier," published in 1968, was widely recognized for its historical and social content. It was selected by the English-Speaking Union for its Ambassador Book List for interpreting “the lives, backgrounds regions and culture of America to the people of other countries.” Choice Magazine named the book to its “Outstanding Academic Book List.”

Among Wyman’s famous mythical creatures were the Dingbat and the Gillygaloo. He wrote of the Dingbat, “This strange creature appears to be a frightening cross between a bird and an animal, having large wings, short antlers, and a short body covered with feathers.” Of the Gillygaloo he wrote, “(It) built square nests on the crest of a ridge or a hill and in them laid square eggs that would not roll downhill. Lumberjacks coveted the square eggs, using them for dice after they had been hard-boiled.” Helen Wyman, his wife, provided illustrations for many of his works. All of the books can be enjoyed in the UWRF Library.

A legacy of giving

"Walker D. and Helen Bryant Wyman Scholarships. Based upon academic excellence in the major, awarded to a student who has completed at least one full year of study at UWRF. Potential for success and financial need may also be factors." (From: https://uwrf.academicworks.com/)