Emeritus Professor of History and Art 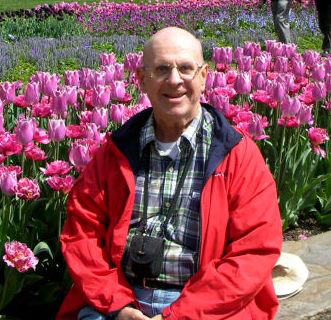 Dr. John Buschen was born in Chicago and attended DePaul University there. After a year's graduate study of medieval history and art at the U. of Strasbourg in France, he returned to the U.S. to earn an M.A. and Ph.D. from Indiana University. In 1966, he was hired by Dr. Peterson to come to River Falls to teach Medieval, Renaissance, and Reformation History. As opportunities arose, he also began to teach art history classes in the Art Department, including European Art, American Art in the late 19th and 20th centuries, Latin American Art, and Asian Art. He made over 35,000 slides for the Art Department collection.

For several years, a number of faculty had been concerned that the university was becoming so compartmentalized that students were unable to relate what they learned in an English literature course with what was going on in history at that time with what kind of music and art were being created at the same time. After much work, Dr. Margaret Odegard of the English Department and Dr. Buschen began teaching the Interdisciplinary Course in the Humanities, which included history, art, music, literature, philosophy, and drama. In addition to the classroom, students were taken to plays and concerts, on walking tours of architecture and visits to the Minneapolis Museum of Art. It was a very special experience.

For a number of years Dr. Buschen was Chairman of the Art Department, and then later he became Chairman of the History Department. He helped organize the Faculty Luncheon Table in the Student Center, since there was no faculty dining room. Every day, faculty from History, English, Music, Theater, Chemistry, Physical Ed., Sociology, Agriculture, and the Admissions Office gathered for a common meal and good conversation.

Each summer for 30 years, Dr. Buschen went to Europe to enjoy the historical and artistic sites as well as good food, and to take slides which he would use for classes. For ten years he led specialized history and art tours of France, Italy, and Spain, as well as Theater and Art Tours of Paris and London. When Dr. Buschen found out that the Falls Theater showed only Disney or children's movies when he arrived in town, he decided to do something. And so, working with Stan McCullough, the theater owner, Dr. Buschen created the Foreign Film Series which ran for 14 of the most exciting years in film creation. There were usually two series per year, with seven films in each series, and a group of cooperating faculty would help sell more than 300 series tickets each time. The River Falls Foreign Film Society became the pattern for foreign film series all over Minnesota, the Dakotas, and Wisconsin where Stan booked films. After Dr. Buschen prepared the schedule and Stan procured the films, he would recommend them to every other college town in the area, and they would follow River Falls' lead.

The Twin Cities and their great artistic and cultural treasures and pleasures were not far from River Falls, but there was no public transportation. And so for years Dr. Buschen organized bus trips to the Twin Cities for students to attend plays at the Guthrie Theater and to attend concerts of the Minnesota Orchestra and St. Paul Chamber Orchestra. Participants paid a relatively small fee and the Student Senate and generous faculty donors provided the remainder.

After a particularly enjoyable summer in Ireland and enjoying the Medieval Banquet at Bunratty Castle, Dr. Buschen, working with Eliot Wold of the Music Department, created the Christmas Medieval Banquets at UWRF. An authentic 15th century dinner was served, without silverware. A chorus of musicians in costumes entertained with 15th century music, and there were jugglers, acrobats and instrumental musicians to entertain. Sometimes a 12th century play was performed under the direction of Bob Beck of the English Department. Rodli was decorated to look like a medieval castle, and for ten years the banquets sold out for every night.

It has been another busy year with traveling, photography, bridge, and reading. My digital camera gives me a great deal of pleasure, and I take thousands of pictures each year and then send many out on the internet for my friends to also enjoy. The time seems to go very quickly. The months of January, February, and March are especially busy because this is the height of cultural season, and I often have three nights of concerts, ballets, and operas each week which I enjoy attending. The snowbirds who winter down here want the arts and entertainment they are used to, and that is fine with me. This season I am looking forward to the violinist Joshua Bell and the soprano Kiri Te Kanawa as well as the Houston Symphony and the Buffalo Philharmonic, especially.

I maintained my custom of enjoying the season of Spring four times per year, as I visited Washington, D.C. to see the cherry blossoms, flowering trees, tulips, and daffodils, as well as the great art museums and gardens. The next month I headed off to Chicago to visit my family and to check out the New Wing at the Art Institute, tour downtown architecture by boat, and take lots of pictures at the conservatories and Chicago Botanic Garden. Then comes Montreal and its charm and its gardens and the incomparable Jean Talon Fresh Produce Market. I got some of my most colorful photos ever there this year. And finally I make it to Wisconsin and Minneapolis for a late spring and luscious peonies and poppies and giant clematis and flowering crabapple trees and rich fields of green.

Come fall, I headed first for San Francisco and the most perfect weather of the
year. I had wonderful adventures with a friend and ate lots of fresh seafood. I
returned to Chicago to enjoy early autumn weather and mums and fall flowers at the Botanic Gardens, and then in October I headed out for Kansas City to visit the three art museums and to enjoy very colorful fall foliage. The collection of American art may be the best in the country, and the audio-guides were very helpful. I enjoyed Kansas City very much.

The holiday season began with the spectacular Christmas Medieval Banquet offered by the Coral Ridge Presbyterian Church. They have a large grammar school and high school and the best music program in the state of Florida. Scores of student musicians, singers, acrobats, jugglers, jesters, and serving wenches dress up in medieval costumes and serve a fine medieval banquet accompanied with music all night long. The best Christmas music is at the First Presbyterian Church so I enjoyed the concert there. Meanwhile, there were fine chamber music concerts by Chameleon Musicians and the Delray String Quartet. It was a very busy holiday season.

I am always happy to hear from former students at jbuschen@gmail.com. I send out a daily "Today in History" list of birthdays and events, if anyone is interested, and I also have a mailing list for accounts of my travels and critiques of cultural events and humor that appeals to me.

Travel, photography, reading, bridge, ballet, music, swimming every day, and good restaurants keep me busy. In March I flew to Montreal for good food, a chance to speak some French, to visit some friends, and to enjoy the ambience of a European city. In April I went to Washington, D.C. for the Cherry Blossom Festival and to check up on the art museums; I discovered a great new small museum, the Krieger. In May we went to San Francisco and enjoyed great weather, the symphony, the ballet, four art museums, the Japanese Garden, and the Redwood Forest, plus great sushi. In August I got to Los Angeles for the first time in a number of years, visited seven art museums, a Japanese and a Chinese garden, heard Renee Fleming sing, took 708 photographs, and had many adventures. In October I went to Baltimore and Philadelphia for a week and enjoyed six art museums, the Peabody Music Conservatory and a concert, and one of the best botanical gardens anywhere, Longwood, in Wilmington, DE. They were having chrysanthemum festival, and it was incredible. I have never seen such magnificent, exotic, lush flowers. Also visited the great Dupont Winterthur Museum of American furniture and art and Hillwood House, former home of Marjorie Meriweather Post.

In between other books, I am reading all of Proust's A la Recherche du Temps Perdu again. The Miami City Ballet and Gamonet Ballet present superb programs here in Fort Lauderdale, and visiting orchestras like Cleveland and Philadelphia keep us entertained. Just discovered the Boca Raton Symphony which is an excellent chamber orchestra nearby which performs in a delightful auditorium with fine acoustics. At a bridge tournament last week, my partner and I won silver points (which is a good thing), and I am creating a major website for a big high school reunion of mine which is coming up. Evenings are spent at my favorite Indian, Thai, Cuban, French, Greek, and Italian restaurants in the neighborhood. "Altar Boyz", the off-Broadway show, was in town last week and great fun. "Spamalot" and "River Dance" are coming up in the next two months, and I have tickets. One of the best Christmas concerts I have ever enjoyed was given at the First Presbyterian Church last Saturday. Friends and former students stop by now and then, which is always very enjoyable.