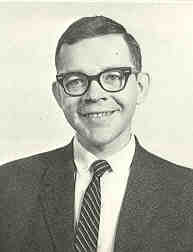 Dr. James T. "Terry" King was born in Nebraska in 1933. He attended Hastings College as an undergraduate and then completed his Ph.D. at the University of Nebraska. He came to UWRF in 1963 with a dual purpose - to teach 19th century U.S. History and to develop the archives, the Area Research Center.

Dr. King taught courses in 19th Century U.S. History, the Frontier, the Civil War, History of Native Americans, History of the West, and the Senior Seminar. He also expanded the Area Research Center to be one of the outstanding archives in the State of Wisconsin and collected primary source documents, artifacts, and recorded oral histories for Western Wisconsin. Dr. King trained an entire generation of students in the skills and pleasures of archival work, and a number of his students went on to become university and state archivists in Wisconsin, Minnesota, Iowa, Michigan, Illinois, and elsewhere. The senior seminar papers which students wrote during those years are primary research materials for anyone working in the history of Western Wisconsin and are carefully preserved in the Area Research Center today.

His own research focused on Western U.S. history. General George Crook was the subject of his thesis. Dr. King was also an accomplished cartoonist, and many of his cartoons (often created on cocktail napkins) delighted his many friends and have been preserved. Friday afternoons were usually reserved for a few beers at Emma's with graduate students and faculty.

For several years, his father, James M. King, also taught at River Falls in the Music Department. He created and trained the University Marching Band which performed at football games and other special events.

Dr. King lived not far from campus, on 2nd Street, in a house which had once been the city hospital. Downstairs lived Dr. Virginia Akins of the Biology Department and across the street was the apartment of Dr. Marion Hawkins of the English Department. Dr. King enjoyed nature and for many years, he and the Petersons and Dr. Buschen would hike along the South Fork and Kinni Rivers.

In 1990 Dr. King retired and moved to Evergreen, Colorado, which he loved very much and where he usually spent his summers. He was able to read at leisure and do volunteer work at the local historical society. He died in 1994. (Contributed July 2013 by Dr. John Buschen)

Frontier Regulars: The United States Army and the Indian, 1866-1890 by Robert M. Utley.

"A Better Way": General George Crook and the Ponca Indians.