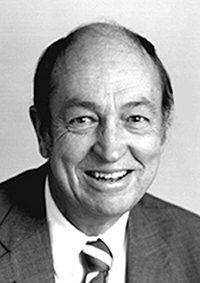 Dr. George Garlid was born in Prescott, Wisconsin, in 1925, the same year as Dr. Peterson and Dr. Stockton. He served in the U.S. Army and then returned to the U. of Minnesota to complete his Ph.D. in American Studies. Dr. Garlid first came to UWRF in 1962 as a part-time instructor while he finished his degree; he was hired full-time in 1964.

Dr. Garlid's specialties were 20th Century U.S. History, U.S. Diplomatic History/U.S. Foreign Policy, the Cold War. He was also the department liaison with the College of Education. Dr. Garlid taught the Techniques in Social Science class and supervised student teachers in the social sciences. As a link between the two colleges, he was particularly valuable. Dr. Garlid also served as Chairman of the Faculty Senate and then as Assistant Chancellor. On several occasions Dr. Garlid served as Acting Chairman of the History Department while Dr. Peterson was in Europe on sabbatical or research. In 1977 he received the Distinguished University Teacher Award.

Dr. Garlid enjoyed politics very much and relished his discussions with students and faculty members like Dr. Bob Berg and Dr. Ray Anderson of Political Science. Dr. Garlid's public service included two years as vice chairman of the Pierce County Democratic Party and the Prescott, Wisconsin School Board. Dr. Garlid was known for his booming voice but gentle nature. He died in October of 1991.

Dr. Garlid lived with his wife Phyllis and their four children in a beautiful house overlooking the St. Croix River in Prescott. The house was the scene of many delightful faculty parties as well as get-togethers with students. Dr. Garlid's four children all worked as life-guards at the beach across the street from their house during the summer and all worked as wait-persons at the Steamboat Inn two blocks from their house while students. (Contributed July 2013 by Dr. John Buschen)

A scholarship fund has been established in Dr. Garlid's honor. For more information about the George Garlid Memorial Scholarship (a/k/a History Scholarship) and how to contribute, please visit Giving Opportunities.