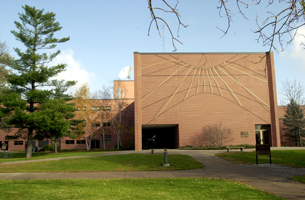 Attached to the south outer wall of Kleinpell Fine Arts, the sundial was placed in recognition of the services of Richard D. Swensen, who joined the River Falls faculty in 1955 and served as chairman of the Chemistry Department and, from 1969 to 1988, as dean of the College of Arts and Sciences. In 1988, he returned to teaching and retired in 1993. As dean, he instituted faculty exchanges both in Europe and the Pacific Rim and brought numerous internationally recognized individuals and groups to campus.

He was named as UWRF Distinguished Professor by the Johnson Foundation and was recognized as the Distinguished Teacher in 1970. He led workshops or consulted with chemistry and physics departments in Taiwan, China, Japan, Korea and Poland. He served two terms as chair of the University Faculty Council (predecessor of the Faculty Senate) and three terms on the River Falls School District Board.

In June of 1970, Dean Swensen, wife Grace Swensen and their six children went on a camping trip to Europe, including time in Heidelberg, Germany. It was during the visit to the castle in Heidelberg that Dean Swensen saw the large, vertical face sundial on the wall of the castle. Immediately the large (39’ high x 58’ wide) south facing wall of the fine arts building at River Falls came to mind as an appropriate location for a sundial.

The vertical sundial was designed by John Shepherd, a professor in the Physics Department. It represents fields in which Swensen is keenly interested: science – represented by the precision of time keeping and the study of astronomy; history – the sundial is the oldest known instrument to measure the passage of hours and days; art – the reproduction and presentation of information; and, multiculturalism – sundials are found all over the world in many cultures. The sundial, with a horizontal measurement of 56 feet and a vertical measurement of 31 feet, is the largest and most accurate one of its kind in North America and is a striking functional sculpture.