A Day in the Girl's Bathroom

When you’re a writer, you often find yourself working in settings that capture your imagination. The girl’s bathroom on the third floor of North Hall is not one of those settings. Still, I found myself there, playing script supervisor to one of the series’ emotional low points. In the writing room we had torn apart and rebuilt this scene over and over again. I had played it out in my head multiple times from multiple angles. I had already heard the words in the actress’ voices. Of course, this was all from the relative safety of the writer’s room.

Reality always plays a little differently. Part of the magic of something as collaborative as this web series, is that the creation is the product of so many points of view. A lot of voices had to express their opinions in order for us to end up in that bathroom. While I had always imagined the scene as a shadowy confession in a strange place where the public and private meet, it was instead shot with sterile fluorescent lighting against bathroom tile that had to have been installed before the end of the seventies. 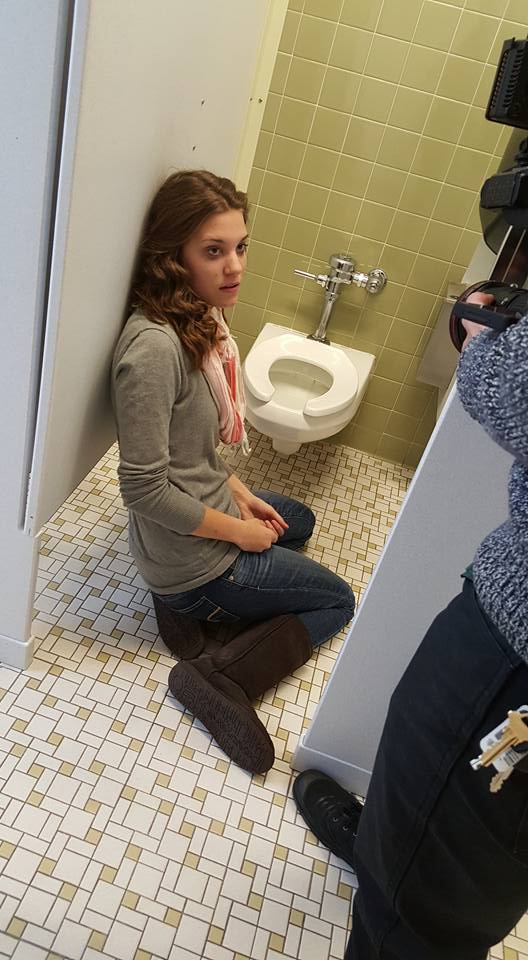 It all gave the scene a surreal nature that I hadn’t anticipated. Everyone in that bathroom was attempting to create this emotionally raw moment under that steady, everyday white light. This is the magic of a class like this. Everyone gets to share their point of view and have input on making the project the best it possibly can be. I was a little disappointed that I never witnessed the full effect of the crew on site until now. Given the chance, I might have visited set more often. As a writer there is always the temptation to reach beyond your grasp. But writers only work with words and paper while everyone else has the real world to contend with.

If nothing else, seeing the art of making words into moving pictures was even more inspirational. It was disappointing that this experience came so late in the class. This was the last episode but I now wanted to do so much more. Seeing the abilities and the talents of everyone involved first-hand only had me wondering what we could accomplish with a little more time.

This class has been an experience unlike any class I have taken. It's the only class I've ever been a part of that is working towards one collective goal. While we all spin off and work on different aspects of that project in smaller groups everything feeds into one giant collaborative effort that we get to share with the rest of campus. It's not something that happens often in an academic setting. Kind of like a guy hanging out in a girl's bathroom.

We are Definitely Failing! Maybe…

The steam engine on this production keeps rolling! We are now finished with our third episode and it looks fantastic. There is a more serious tone with this one that I feel will sink with everyone who watches. Don’t worry though; there are still plenty of comedic bits. At this point in the series, we are running like a well-oiled machine. Everyone knows their part to play in creating this wonderful masterpiece I’m sure we are all super proud of. 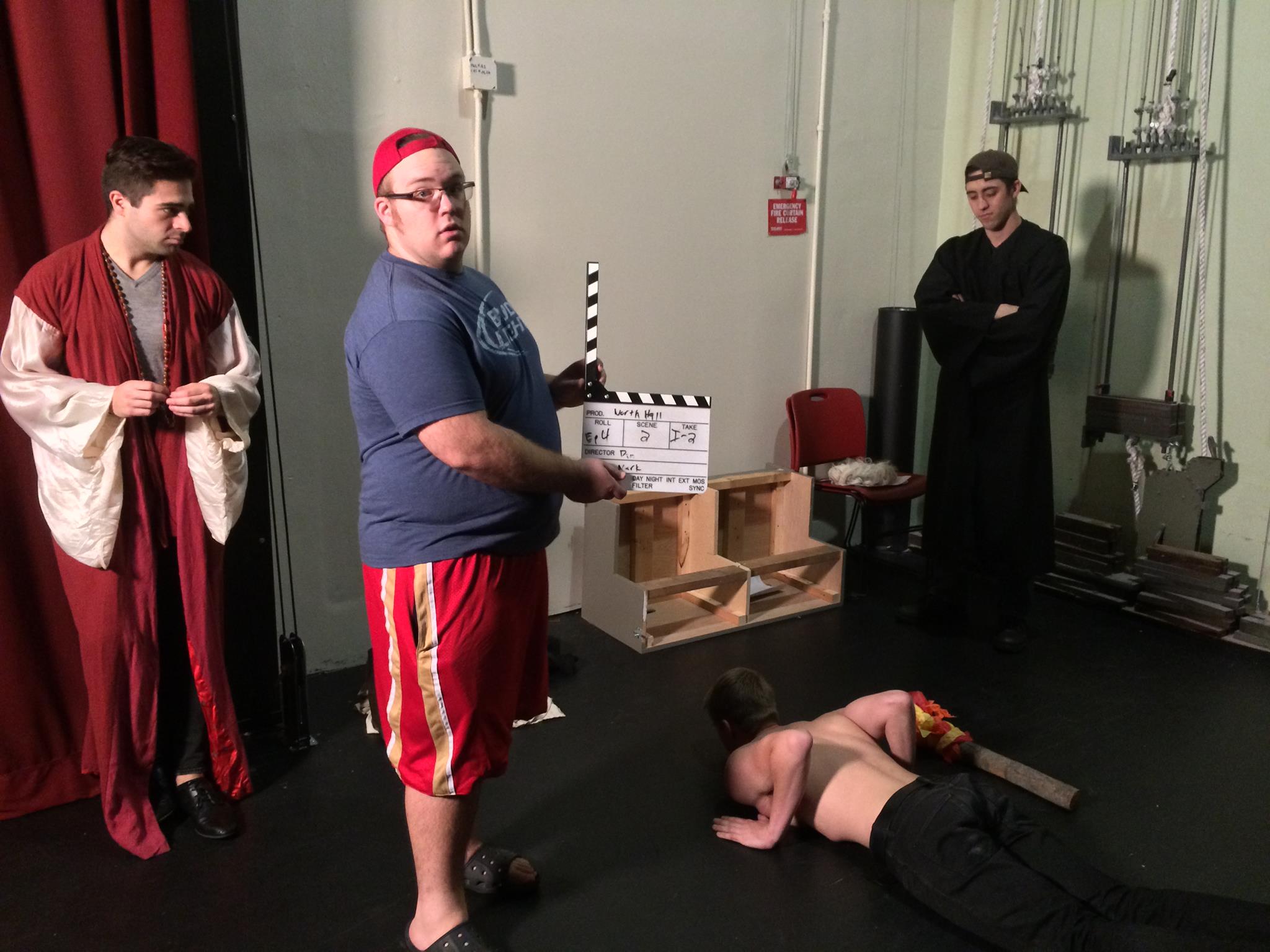 The crew works really well together and we all bring our own ideas to help better this production. We never lose our energy, even after countless takes of the same scene; all from different angles. Luckily this episode we had a director who saw the scene and knew what he wanted to showcase. Filming always went by fast and efficient. There were a lot of minor changes to lines or actions that had to deal with the flow of words or the technicalities of filming a specific scene. One of which included real fire! One of the lines in the script, in which Tyler’s character, Richard, has to say, kept us all in good spirits as Tyler struggled to say it without laughing.

I am very proud of what this class has accomplished. And I feel that every single person will say the same thing. This is a truly amazing opportunity we were all given.

I Think We Are Gonna Pass!

A sense of excitement fills the air when we are on set. Whether that set is a hallway, a park bench, or a study lounge never seems to matter. We are all caught up in a moment. There isn’t a sleepy eye or a bored face. Not even when we reshoot the same six lines of dialogue fifteen different times.

I enjoyed a more distant view of the process than most of the other students on set. Unlike the actors, producers, directors, and equipment managers, my stay and purpose on set was only temporary. They were immersed and in character. There was a tasteful balance of frivolity and fun. Yes, we laughed and made endless jokes about Brent’s character, Erik, throwing entire slices of bread across campus in his ritualistic contemplations. But, absurdity aside, that did not stop our camera crew from meticulously capturing the event from three different angles. The process was painstaking, and the humor ran its course long before we finished creating the scene. But not one person complained or wished they were anywhere else. We all had a goal in mind, and that goal was to make something special. 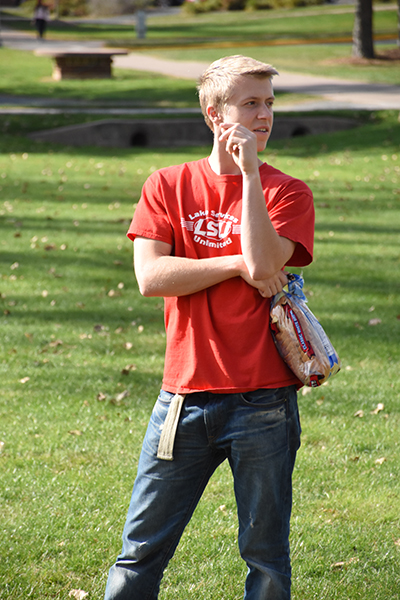 I could really only stand in amazement at the cohesion and synergy a dozen amateur college students could show in coming together to create a memory that will not only last in our minds but in our film as well. Sydney remained calm and collected: a charismatic center around which the whole process revolved. From script writing to stage lighting, everything has to be done not by adults but by young men and women venting their creativity in something truly productive. I couldn’t help but feel a little humbled as I held my copy of the script and watched the magic and science happen around me. I was a part of something special.

We Call It Collaboration

As of Friday (Oct. 2nd) we have officially finished filming all our scenes for the first episode of the Falcon Web Series production "Pass or Fail" and should be able to start sending out teaser videos soon. After three days of shooting, it is clear to see the teamwork and dedication the team has for this project and it's likely that it will show through in the finished production. 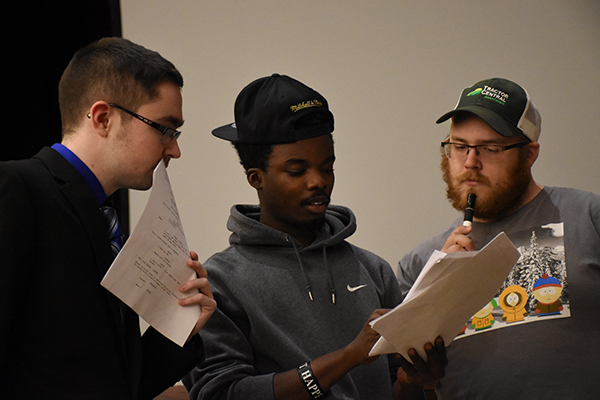 Our first day of shooting was focused primarily on us filming the opening scene: a Women's Studies professor giving a lecture to a classroom filled with girls, her Teacher's Assistant, and our three male protagonists. There was a scramble leading up to the shoot as all of the Web Series team enlisted all of their female friends to fill in as women's studies students, but we were able to find enough volunteers to fill the classroom. We were also able to recruit Dr. Parkinson, an actual professor here at UWRF, to play the professor of the class and she even was able to use a PowerPoint from one of her lectures. She and all of our extras did a fantastic job adding to the realism of the scene and we really cannot thank them enough for coming at such short notice!

Our second day of shooting we were able to do a hallway scene as well as the beginning of a montage set in a study room, using the UWRF Agriculture Science Building as our set. Filming in a hallway was a bit of a challenge, as it meant we were constantly directing college students around our set so they could get in or out of the building. Luckily, we were able to finish the scene fairly quickly before any late classes let out or else we would have been overrun and forced to stop filming. The beginning of the montage was quickly filmed, but we realized that it was beginning to get to the end of our filming time. That, as well as the knowledge that the second part of the montage involves lots of glitter, pushed us to save it for the next day of shooting.

On our final day of shooting, by an enormous amount of effort on the team, we were able to film four entire scenes. Firstly, we brought back Dr. Parkinson to shoot a scene where the three boys are confronted by the professor in her office. For this scene we were able to get permission to use the Dean's Office which was a truly great gesture by Dr. Davis. We were allowed to make a few alterations to the set (such as switching out a few of the books for more feminist titles, the nameplate on the desk being changed, and even a poster) and the result was a perfect setting for the Women's Studies Office. Next, we filmed a scene where the boys talk with the TA and are reprimanded for their lack of effort. We were able to use the UWRF Involvement Center as the set for the TA's office. Afterwards, we had just enough time to finish up filming the study room montage and, lastly, a scene with the boys walking outside.

There are still a few video editing choices that need to be made before we can call the episode a finished piece, as well as some audio that needs recording because of the wind being too loud in an outside scene. Nonetheless, we are nearing the completion of our first episode and hope you are excited as we are to see the finished production!

Connect with us on social media!