"Small Potatoes" is a collection of memories about growing up in River Falls, Wisconsin, during the Depression era. George D. Foss reminisces about life and activities in River Falls; poverty, job loss, and the WPA (Works Progress Administration); and recalls childhood stories about attending matinees at the old Falls Theater, going to Glen Park, and Christmastime during the Depression. A hard copy of Small Potatoes is held at the UW-River Falls University Archives and Area Research Center as well as the Pierce County Historical Association in Ellsworth, Wisconsin.

A transcription of the memoir is available online at USGenWeb on the Pierce County, Wisconsin, page under "Memoirs."

Excerpt from "Small Potatoes":"I learned what it meant to steal." 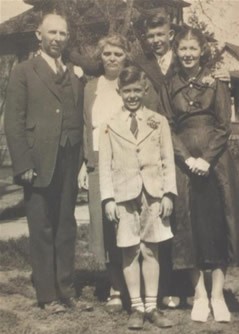 "I recall an incident that occurred while we lived in the Denzer house. I don't know the exact year this happened, but at the time of the incident I didn't know the real value of a dollar. I would guess the year was about 1934 or I was home alone one afternoon and I spotted a silver dollar on the top of my folks dresser. I didn't know how much it was, but I knew it was valuable because it was so much bigger than a familiar nickel. Since there was no one around I decided to take it and buy some candy. I went downtown to Mueller's Corner Grocery Store. Then I proceeded to pick out some candy and handed old man Mueller the silver dollar. He said "wait a minute, you have some change coming." Well, my eyes nearly bugged out of my head when he kept putting change into my hand. There were quarters, nickels, dimes, and pennies. I only thought about how rich I was. Then it started to sink in that I had really gotten into more than I had bargained for. What to do with the big bag of candy, and what to do with all that change? I went down by the railroad tracks and hid it all under a big rock. After I got home no one had missed the dollar yet. Soon, however, a crisis swept over the family. My folks never accused anyone, but they never let up in their relentless search and discussion about it. This went on for several days. I was aware things were bad, but I didn't realize the scope of this. I never let on that I took it because by this time I was scared to death, and I didn't know how to confess...Instead of thinking that I had gotten away with the perfect crime, I realized from that time on what it meant to be honest."