What's in the index?

Currently there are only about 6,200 records in the Archives Records Search index. Check back often because we will be continually adding new entries. The search page has a counter that will give you up-to-date statistics on the number of records in the database.

The entries currently include:

What's in these records?

The civil case files contain issues like divorce, estates, damages, nonpayment of debts, and other civil litigation. The criminal case files contain different types of crimes depending on the time period. For example, bootlegging is a "popular" crime during Prohibition. Horse stealing is more prevalent in the 19th century than in the 20th century. A special thank you to members of the St. Croix Valley Genealogical Society who have been indexing the Pierce County court records for us!

For those of you familiar with the Area Research Center, the birth, death, and marriage newspaper notices are from our in-house paper catalog index known as the Biography, or Bio, Index.

Many of the birth notices say "son of" or "daughter of" because the children were not yet named when the notice was published. Frequently, the notice gives only the father's name, or says Mr. and Mrs. So-and-So. Consequently, the "Given Name" field will display something like "John, son of" or even "John, child of." In a few cases the father's name is not even there and the name will be simply "[daughter]" or "[son]" or "[child]". The same is true for many women's obituaries/death notices. The woman's given name will not be used and the index will display "John, wife of." If we find the name on another record and enter that in the Alternate field, you can search it and it will come up in the results that are displayed.

Because of the often early dates on these records, we're calling them notices. In the earlier years that's all they were – a sentence or two noting the event. So, do not expect a full-blown obituary if it has an early date on it. During most of the 19th century, only prominent members of the community had obituaries. It wasn't until the 1890s, when the old pioneer settlers were dying off, that the lengthier histories of their contributions to the community became more common. Many people still did not have obituaries well into the 20th century because of the work it required family members to complete, including personal histories and submission for publication into local newspaper/s. Many of the small notices are to be found in the local news columns, along with who was visiting and who was having a card party. Even currently, not everyone gets an obituary, but only a short notice of their death and maybe when the funeral will be.

Naturalization records cover the process of becoming a U.S. citizen. Prior to 1906 and well into the 20th century, most people declared their intention to become a citizen and then petitioned the court for citizenship in county courts, although it could also be done in a Federal court. We have naturalization records for all four of our counties and the index information is added regularly.

If you are confused about what is being searched, you have come to the right place!

The Surname / Alternate search box searches two different fields in the index, both the Surname field and the Alternate field. Below is the entry screen we use to put the names into the database. The name of the wife as it appeared on this record was "Chaplin," but we know from another record that it was really "Champlin." Because Champlin appears nowhere on this record, Champlin goes in the Alternate Name field, and in square brackets to let you know that it is coming from somewhere else.

Although you are searching both the Surname field and the Alternate Name field at one time, the results appear in their own columns. Results give you the Surnames as they appear on the record in one column and any Alternate spellings in another column. Also in that Alternate column are any maiden surnames, coming either from the record itself, or from another record. Finally, business names and government entities that appear in the court records also get listed in the Surnames column. Names added by us from another record will be in square brackets.

You do not need to know which column in the results the name will appear in, just enter any name in this box and it will search multiple fields for you. Notice that all Surnames will display alphabetically first, followed by anything in the Alternate field second.

The same thing applies to the Given name and to the Nickname fields. Both get searched together, but then display in separate columns. The Nickname column is slightly misleading in that we put the name as it appears on the record in the Given name field. If that name is just initials or is a nickname, and we know what the actual name was, the true name will appear in the Nickname field in square brackets.

The results list names from the Surname or Given name column first, and then the Alternate names columns second.

The information initially included in the index were created for purposes other than an online index. Previous to the online index, the county name was not included in our recording, especially in the case of the newspapers. That means that county names were added more recently based on what county the newspaper is located in, which is not necessarily the county the person is most related to.

County borders are porous in regards to newspapers, especially obituaries. People often lived in more than one county over the course of their lives and it is hard to put them in just one county for the index. The same is true of the state boundaries and you will occasionally see "Minnesota" for the county because that is where they ended up.

Births and marriages are a little bit easier in that we can use the county where the event happened. So be aware that someone who lived in Polk County might have been born in St. Croix County because that was where the closest hospital was.

Don't automatically dismiss an entry because it seems to be the wrong county. If you want to know for sure before you spend your $5, ask (email). We will look up the entry to verify the county, and change the index if necessary.

What do we plan to add?

The name is wrong, will you fix it?

We cannot "fix" the name as it appears on the original record. But we have the Alternate name field in the online index for "variations". We can put the name you believe is correct in that field if you provide some sort of proof, such as a record from Ancestry.com. Email us for more details or to suggest changes.

The date is wrong, will you fix it?

The date comes from the original record and cannot be changed. Newspaper dates are the date the paper was published, not the date the event happened. Events that happened toward the end of the year may not be documented in newspapers until January of the next year.

What is that column for portraits about?

That column is intended to let you know if the record or newspaper article includes a portrait. It does not refer to stand-alone portraits that we may have. The newest naturalization record pictured on the right is an example of a record with a portrait included.

Some obituaries also have portraits, although rare. The portrait column for the earliest items indexed are not necessarily reliable because we did not initially include that information. Some of the few obituaries that include portraits (but are not documented as such in the index) are for Civil War soldiers who died in the 20th century when newspapers were able to print photographs.

One warning with newspaper photos: the newspapers are all on microfilm, which does not produce a very clear image. We have nice microfilm scanners, but the original microfilming job greatly affects what kind of image we can provide. 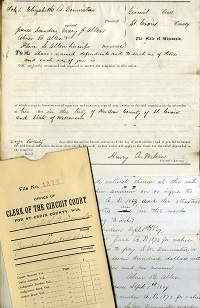 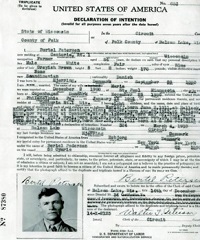 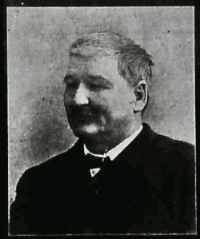 Portrait of Frank D. Harding from his 1902 newspaper obituary