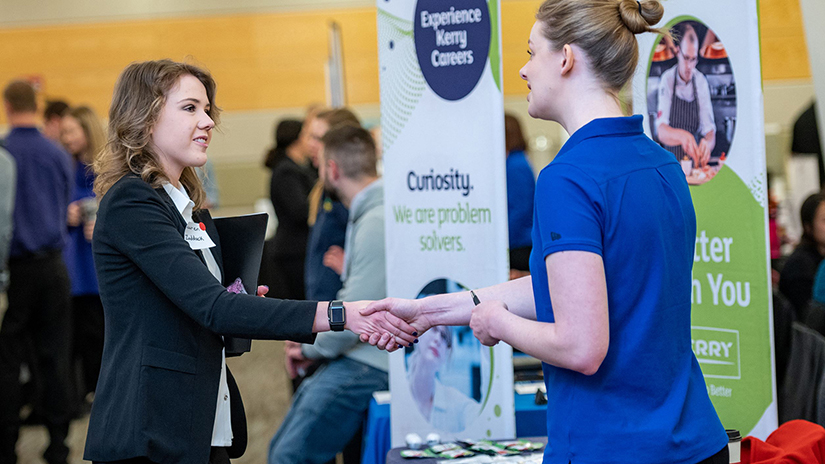 May 2, 2022 -- A new report by Career Services at the University of Wisconsin-River Falls found that despite the economic impacts of COVID-19 the school’s graduates were in high demand.

The First Destination Report revealed that 94% of graduates from August 2020 through May 2021 advanced their careers within six months of earning their diplomas by either finding employment or continuing to graduate school.

The 94% includes 15% of students who are continuing their education.

Career Services Director Melissa Wilson credited the academic preparation of the students for the high percentage of students employed or continuing their education.

“Much of their success can be credited to the faculty and their dedication to serving students during a time of uncertainty, and their continued focus on education for our students using different methods of delivery,” Wilson said.

Career Services Assistant Director McKenna Pfeiffer noted the report captures 80% of students who graduated from UWRF during that period, which is a high percentage.

This cohort of graduates would have had the unusual experience of virtual Career Fairs and experienced unprecedented changes in the way their coursework was delivered. Additionally, some may have experienced internships being canceled or becoming virtual, Pfeiffer noted.

“They have lived the art of change,” Pfeiffer said. “From their college experiences to their job searches. It is impressive to see the graduates come through the second year of the pandemic this strong. What is fun to observe is this group’s overall engagement in experiential learning.”

A total of 76% of students participated in an academic internship, research, or a student teaching experience.

According to data, 2.5 out of 5 graduates participated in two or more experiential learning experiences, Pfeiffer said.

“There were some participating in up to five,” she noted. “They are thirsty for hands-on and relevant experiences where they have an opportunity to apply what they are learning in the classroom.”

Wilson agreed experiences outside the classrooms are important not just to students but also to employers.

Of the graduates, 89% stayed in Wisconsin and Minnesota. Graduates were hired in 34 states and six countries at 688 unique companies.

Graduates from 2020-21 found work at 43 companies that are ranked in the Fortune 500. Some of those who hired multiple graduates included Amazon, Andersen Corp., Fastenal Co., Land O’Lakes, Medtronic, Target, 3M, Northwestern Mutual and Corteva.

Gina D’Agostino, who graduated in May 2021 with a degree in marketing communications, did an on-campus internship her first year at UWRF doing social media for the men’s hockey team and then one in graphic arts at Menasha Packaging Company in Neenah in summer 2018. She also did a summer internship in social media at the NBC Golf Channel in Orlando in summer 2019. She was at Walt Disney World in Orlando for a spring internship in sales and merchandising at the Animal Kingdom theme park, which was shortened because of COVID-19.

While at UWRF she attended every Career Fair.

“Even if I wasn’t looking for a job or internship, I went to go and meet employers and improve my communication skills,” D’Agostino said. “I would ask people what they did for a living and get ideas about careers.”

D’Agostino, of Bloomington, Minn., works at the JW Marriot in the Mall of America as a group coordinator in the event planning department. She coordinates room blocks for social and professional groups and small corporation meeting rooms. She was hired in April 2021 before she graduated from UWRF.

“I really do enjoy the hotel industry,” D’Agostino said. “I like collaborating with people and making their vision come to life during an event.”

D’Agostino worked at Career Services while a student and used the services available to all students to improve her resume writing skills and job interview techniques.

Wilson also credited the high number of graduates employed because of the UWRF Career Fairs and Career Treks, including the UW System virtual Career Treks, which allow students to learn more about potential employers.

Students who are graduating in May are encouraged to complete the next First Destination Survey. Go to the Career Services website to learn more.