The lecture series honors the memory of Professor Ed Peterson, who taught at UWRF from 1954 to 2005. It addresses issues that were the focus of Peterson's academic life and are still relevant today:

Edward N. Peterson taught history at the University of Wisconsin-River Falls from 1954 to 2005. Among the many courses he enjoyed teaching were those focused on the 20th century, especially World War I, World War II, and the Cold War. Peterson wrote ten books on Germany in the 20th century and devoted his scholarly life to issues surrounding war, peace and power. To honor the memory of Peterson and to address the vital issues of our time, the History and Philosophy Department established the lecture series to emphasize the issues that were the focus of his academic life:  war and peace, abuses and limits of power, and the struggle for democracy in the 20th century. 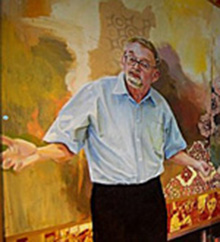 Image from mural by Garrett Bergmann, located in the Wyman Education Building.

To honor the memory of Ed Peterson and to address the vital issues of our time and to emphasize the issues that were the focus of his academic life: war and peace, abuses and limits of power, and the struggle for democracy in the 20th century.

The lecture series will be held annually on the UWRF campus. The funds that made the endowment possible were generated by the generous donations of students, alumni, faculty and friends, collected over many years. Your continued support enables this valuable series to continue.

Launched Tuesday, Oct. 2, 2007
We were pleased to have Stephen Feinstein, Ph.D., UWRF Professor Emeritus and Director of the Center for Genocide and Holocaust Studies at the University of Minnesota, as the first speaker for the lecture series. Feinstein presented "When 'Never Again' is a Cliche: The Complicated Role of Rescuers in Genocide."

The purpose of the lecture series is in the Memorandum of Endowment Purpose: The purpose of the endowment will be to provide a sum of money annually to be used for a history lecture for the university community to honor the memory, teaching and research of Edward N. Peterson.

The lecturer should be an established scholar or thinker addressing a topic related to arenas that were the focus of Peterson's academic career: war and peace, abuses and limits of power, or the struggle for democracy in the 20th century.

Our sincere gratitude to all who have contributed to the History Department Special Project Funds over the years and to those who continue to contribute to the Edward N. Peterson Lecture Series Fund. It is your generosity that makes this series possible.