Sept. 9, 2016: The corpse flower seems to have bloomed all it's going to by 1 a.m. this morning before already starting to close. It did not bloom as fully as it had three years ago. You are still welcome to come by to take a sniff and to observe its colors and magnificence! Thank you for your interest in the corpse flower.

Sept. 8, 2016: The spathe is pulling away from the spadix this morning. The plant is now 53 inches tall. Hoping today is the day it blooms!

Sept. 7, 2016: The corpse flower has not yet bloomed. It is now 51 1/2 inches tall. Our apologies for the inconvenience of the live stream going down. We are working on getting it back up soon.

Aug. 25, 2016: Dan Waletzko anticipates that the corpse flower will bloom in the next 1-2 weeks. See this video for an interview with Dan, our greenhouse manager.

The Titan Arum or Amorphophallus titanum is a flowering plant with the largest unbranched inflorescence in the world. The plant is also known as the carrion flower or the corpse flower because the flower’s fragrance is similar to the odor of rotting meat. The Titan Arum was discovered by Italian botanist Odoardo Beccari in Sumatra in 1878. It grows wild only in the tropical forests of Sumatra. The Titan Arum first flowered in cultivation at the Royal Botanic Gardens, at Kew in London in 1889. Since then, more than 100 cultivated flowers have blossomed. Titan Arum flowering was first documented in the United States at the New York Botanical Gardens in 1937.

The Titan Arum grows from a tuber which can eventually weigh over 200 pounds. The plant produces a single leaf that can reach twenty feet tall and fifteen feet across with a petiole as thick as a person's thigh. The single leaf will grow for about twelve to eighteen months and look almost tree-like. The leaf will then die back and the tuber will rest for about six months, followed by another single leaf.

After a number of years of vegetative growth, the tuber will send up a single inflorescence with both male and female flowers. The inflorescence develops over about three to four weeks and when fully developed can reach ten feet tall by three to four feet wide. The spadix (fleshy central column) has thousands of flowers hidden in its base. The outer spathe, which looks like a frilly upturned skirt has a maroon interior and green exterior. The large inflorescence usually opens abruptly (within hours) and remains open for only a day or a day and a half.

When fully open, the inflorescence produces a rotting-fish-burnt-sugar scent. The odor is strongest at night and attracts carrion beetles and flies which serve as pollinators. Additionally, the tip of the spadix warms up to approximately the temperature of the human body. This heating is thought to assist in dispersing the scent. After three to five days the spadix collapses. The spathe falls off and the fruit mature if there has been successful pollination. The poisonous ripe fruit are bright orange-red, about the size of cherries and are attractive to birds. Birds eat the fruit and disperse the seeds. (EIU 2010)

The seed for the Titan Arum at UWRF was obtained from the University of Wisconsin-Madison in 2001. The ovule donor was Big Bucky and the pollen donor was Mr. Magnificent from the Marie Selby Botanical Gardens in Sarasota, Florida. The seeds for both Big Bucky and Mr. Magnificent were collected by Dr. James R. Symon during a trip to Sumatra in 1993 on a BBC expedition filming The Private Lives of Plants. Symon collected the seeds from the sole A. titanium found in fruit and distributed the seeds to U.S. and British conservatories and greenhouses for cultivation. Amorphophallus titanum is on the World Conservation Union’s Red List of Threatened Species.

The corpse flower fully bloomed the evening of Monday, August 19. To view the time-lapse video of the event, click on the video image below. Also click here to view more photos.

Update, Monday August 19: The last sheath of the flower wilted on Sunday, August 18. A dark maroon color is developing on the spadix. The height of the flower is around 48 inches and has slowed its growth. 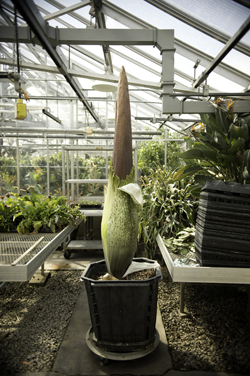 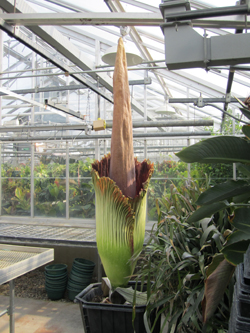 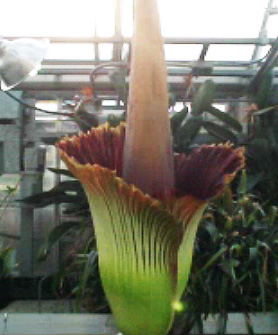 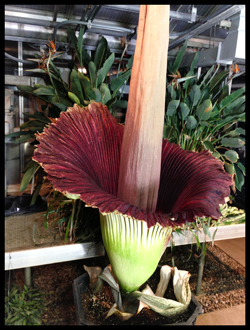 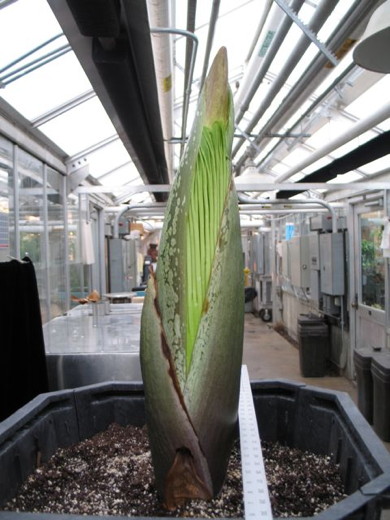 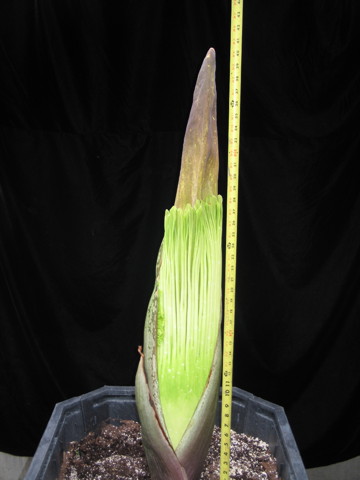 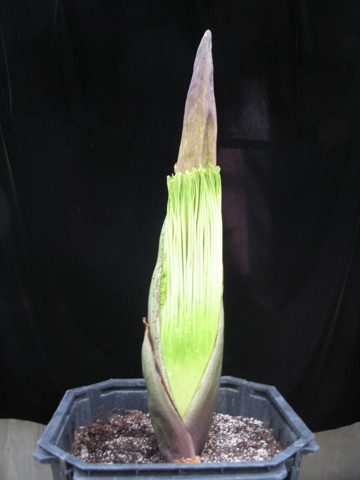