Agitation for student government began in the 1920's. By May of 1 937 a Student Senate, complete with a constitution, was fully formed. The 1960's was an exciting decade on the River Falls campus. It was the era of civil rights and Vietnam. The Student Senate adopted a guide supporting student rights to participate in peaceful campus demonstrations and "teach-ins." Unrest was not limited to issues of national interest. Students rallied for changes on campus including having more freedom in dormitories, banning the obligatory freshman "beanies," and allowing the sale of beer on campus. 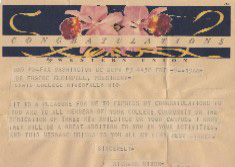 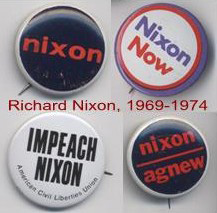 Campaign buttons first appeared during the 1896 presidential election between Republican canidate William McKinley and Democratic candidate William Jennings Bryon. There are over 800 known varieties of McKinley buttons alone. The slogan "a full dinner pail" was popular among McKinley supporters and refers to the prospering economy of the day. 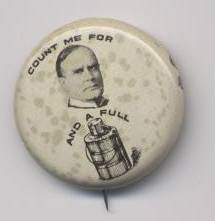 In 1896, the Democrats campaigned on the issue of promoting unlimited coinage of silver money by the federal government, i.e. "free silver."  Above: 1896 campaign button for William Jennings Bryon. 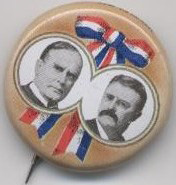 This type of button is called a "jugate," which refers to the paired images. Jugate campaign buttons featured a picture of the presidential candidate and his running mate. Above: McKinley and his vice-presidential running mate, Garret Hobart. Below additional Jugates (L to R): Calvin Coolidge and Chas. Dawes, 1924; Wm. Jennings Bryan and John Kern, 1908; Alton Parker and Henry Davis, 1904 Despite the fact that both William McKinley and Garret Hobart died in office (Hobart died of heart failure in 1899; McKinley was assassinated in 1901) their campaign buttons do not hold a great deal of value because of their plentitude. 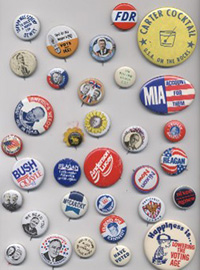 While the Student Voice remained the newspaper of the majority, several underground newspapers, including the Stifled Vice (below), began to appear on campus during the 1960's. See UWRF Series 97 (Misc. Student Newspapers) for more