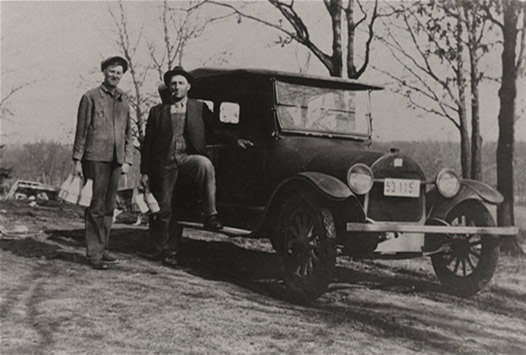 Flour milling was the boom industry of early River Falls but by 1900, as many of the mills were facing declining production or closing down altogether, it had become clear to farmers and businessmen that a single-crop economy could not be sustained. In the transition away from milling many new ventures were pursued including creameries, starch and brick manufacturing, and dairying. The dairy industry soon emerged as the most promising opportunity. John M. Bartosh, citizen and future mayor of River Falls, was one of the first to seize upon this opportunity.


John M. Bartosh (10/20/1885-1/1959) was born in the town of River Falls and spent the majority of his life there except for four years beginning in 1898 when his family moved to nearby Burnett County to pursue a timber claim. Returning to River Falls, he worked on several different farms and in 1909 married Mary Maresh. For the next seven years he worked on several rented farms and had two sons, Clair and Earl, and a daughter, Alice (Mrs. Thomas Chapman). Bartosh then worked in the Lord's Livery Stable and in 1916 rented a farm which consisted of 133 acres inside the River Falls city limits and 10 acres in the town of River Falls. It had belonged to Joel Foster, a founding settler of River Falls, until Bartosh bought it in 1929.

The Bartosh dairy operation, known as Park View Dairy, consisted of 40 cows. The milk was unpasteurized and delivered in glass bottles. In 1920-22, Bartosh started a milk route and by 1942 his route served 176 homes and one store in the city of River Falls that took 300 quarts of milk per day plus cream. Bartosh was the first to make used of motor vehicles for the trade and made daily deliveries to customers all throughout River Falls. During a severe heat wave in the 1930's, when pastures were dry and dairy production down, Bartosh even moved his herd to a far northern area of the state near a lake with plenty of lush pasture and trucked his dairy back down to his many customers in River Falls every morning and night. In the years before modern mechanization, he employed up to three hired men and one college student in addition to his two sons. The Park View Dairy was operated until 1942, at which time it was discontinued due to delivery and labor problems caused by World War II. Relatives report that only two days went by during those 20 years when Bartosh or one of his sons did not go out with the milk truck.

John Bartosh was also involved in River Falls politics. He served as a 4th ward Alderman from 1933 to 1943 and was named acting mayor in 1944 to fill out the term of William Hagestad who joined the Army. Bartosh served until 1950 and again from 1952 to 1956. In his capacity as mayor during the World War II years, Mayor Bartosh joined forces with several prominent River Falls businessmen to support the war effort. Bartosh offered up one of his barns for use as a warehouse for collecting clothing, bedding and other supplies for shipment overseas. The Carisch Garage (ca. 1928) and A.W. Lund Co. (1890) also doubled as collection depots, while others such as Tousley's and Ed Leary offered their company trucks for collection efforts.

In an interview for the centennial anniversary of River Falls in August of 1948, John Bartosh is quoted as saying "I've seen a lot of nice places, but I've never seen anything I like better than River Falls. My wife and I wouldn't live any other place. If you want something, just come to River Falls and you'll find it."

John Bartosh spent his retirement years hunting, fishing, and traveling and died in January, 1959, at the age of 73. Bartosh Lane in River Falls was named after the former mayor and businessman. Both John and Mary Bartosh are buried in Greenwood Cemetery in River Falls.