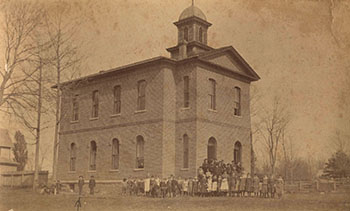 The Pioneer Girls' Club, founded in 1915, was comprised of women who either attended or taught at the old brick academy in Ellsworth, Wisconsin. The Pioneer Girls held a reunion every year on the last Thursday of June. Reunions continued until at least 1956. "Old Brick Academy," Ellsworth, ca. 1873 Gertrude M. Cairns (1872-1959 ) was the club secretary and treasurer for many years. Her mother, Mrs. Abbie S. (Leavitt) Cairns, taught at the academy after moving to the area from Maine in 1857. At age 84, Abbie Cairns presided over the first reunion (and several thereafter) of the Pioneer Girls which was held in June of 1915 at the home of Mrs. Will Endress. She called the meeting to order by ringing the same small handheld school bell as she once had at the old academy, then read off a roll call to which many of her former pupils answered. Thirty five women were present, 65 absent, and 34 deceased. Click here to see an invitation and read an article about the first reunion. The Pioneer Girls' School portion of the Cairns' papers include meeting minutes; membership and attendance records; reunion invitations and correspondence between club members; elaborate scrapbooks containing reminiscences; poetry; newspaper clippings (1928; 1941); photographs and tintypes of club members, family, friends, and the city of Ellsworth; and crafts made by members such as jewlery, wreaths and garlands, needlework, and paper dolls. River Falls Mss I also contains a wealth of materials on the Cairns family including correspondence, personal diaries, and materials related to the various municipal offices held by Gertrude's father, Geroge Washington Cairns (1826-1900). For more details on these items, enter "Gertrude M. Cairns" into the UW-River Falls Voyager library catalog to view a holding record.