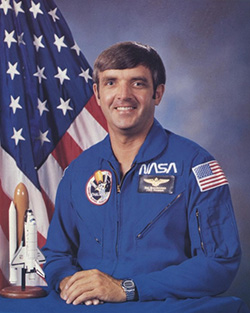 Daniel Brandenstein was born January 17, 1943, in Watertown, Wisconsin. From 1961-65 he attended UW-River Falls, then known as the Wisconsin State College at River Falls (WSC-RF) majoring in math and physics. "Brandy," as he was known around campus, is remembered by friends and classmates as a shy but popular, all-American student who aspired to be a U.S. astronaut. Throughout his years at WSC-RF, he engaged in many campus activities including the Social Committee (1965 Meletean), the Physics Colloquium (1965), the Math Club (1964), and Kappa Theta, (1965) as well as being a counselor for Prucha hall and serving on the Student Senate (1965). After graduation, Brandenstein enlisted in the Navy and served as a test pilot before flying 192 combat missions in Vietnam. In 1978 he was one of 35 astronauts chosen to fly NASA's space shuttle fleet in the 1980's.

"Houston, I think we got a satellite."

Those were the words spoken by Commander Daniel Brandenstein from inside the Shuttle Endeavor after a three person crew caught a spinning 4 1/2 ton Intelsat-6 satellite while on a space walk in May of 1992. From 225 miles above earth, traveling at 17,500 miles per hour, Commander Brandenstein led a team of mission specialists, NASA's first ever three person spacewalk, in rescuing the errant $157 million satellite. This was Brandenstein's fourth shuttle flight. After being selected by NASA to train as an astronaut in January of 1978, Brandenstein amassed hundred of hours in the Orbiters Columbia, Challenger, Discovery, and Endeavor. He was involved in multiple onboard experiments and filmed Earth with a special IMAX camera for the film "The Blue Planet." Brandenstein often brought personal mementos with him to space including his parents' wedding rings, a Watertown medallion and municipal seal, and even some items from his alma mater including a Freddy the Falcon, UW-River Falls t-shirts and a River Falls pennant.

1978-1979— Selected by NASA to become an astronaut. Served as ascent CAPCOM (capsule communicator) and a member of the astronaut support crew for STS-1 and STS-2 for the Space Shuttle Columbia.

1992— Commanded STS-49, the maiden voyage of the Space Shuttle Endeavor. 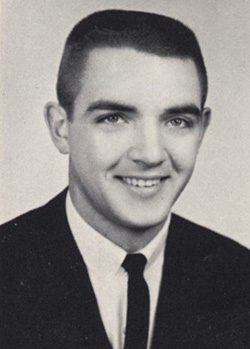 "An Easy Person to know but a difficult person to introduce."

Daniel Brandenstein was once described by UW-River Falls Chancellor Gary Thibodeau as "an easy person to know and a difficult person to introduce." Brandenstein has spent over 789 hours in space and orbited the planet Earth 524 times. Throughout his career he has been recognized with numerous medals and special honors including the Distinguished Flying Cross, 17 Air Medals, the Legion of Honor from the government of France, 2 NASA Distinguished Service Medals, 4 NASA Space Flight Medals, 2 NASA Outstanding Leadership Medals, the American Astronautical Society Flight Achievement Award, multiple honorary doctorates, and the status of UW-River Falls Distinguished Alumnus. Dedicated in 1990, Brandy's eatery, located in the Hagestad Student Center on the UW-River Falls campus, is named after Daniel "Brandy" Brandenstein. Along with photographs, certificates, and the t-shirt he wore in space, Daniel Brandenstein donated samples of space food from NASA to the UW-River Falls Area Research Center & University Archives. (#1 trail mix; #2 coffee with sugar; #3: chocolate brownie; #4 teriyaki chicken; #5 shrimp cocktail; #6 broccoli au gratin).