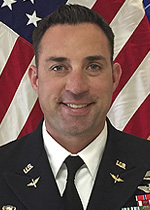 Lieutenant Colonel Jesse Johnson is currently the Professor of Military Science (PMS) for the University of Wisconsin-Stevens Point, responsible for developing future leaders and officers of character for the U.S. Army. His program also includes the UW-River Falls, UW-Stout and UW-Eau Claire Army ROTC programs.

Prior to be selected as a PMS, LTC Johnson was assigned to the 10th Mountain Division (LI) at Ft. Drum, NY from 2013 to 2016, where he served as the Operations Officer and Executive Officer to the 6th Squadron, 6th Calvary Regiment of the 10th Combat Aviation Brigade. In 2015, he deployed with the 10th Mountain Division Headquarters, serving as the Secretary of the Joint Staff, United States Forces—Afghanistan.

From 2010-13 LTC Johnson was assigned to Washington D.C. as a member of the Army’s Joint Chiefs of Staff/Office of the Secretary of Defense/Army Staff Intern Program. Each year the Army selects 20 officers for this program that comprises of a Master’s Degree in Policy Management from Georgetown University; a one-year assignment on the Joint Staff or OSD; and a one-year assignment on the Army Staff.  His program assignments upon completing his graduate studies were as a Deputy Legislative Assistant to the Chairman of the Joint Chiefs of Staff, and as a Community Relations Project Manager in the Army’s Office of the Chief of Public Affairs.

From 2009-10, LTC Johnson served as an Aide-de-Camp at Ft. Leavenworth, Kansas for the Deputy Commandant of the Command and General Staff College.

Prior to his Aviation career, LTC Johnson was enlisted for two years in the Military Police Corps until selected for the Army’s Green-to-Gold program, resulting in a four-year Reserve Officer Training Corps (ROTC) scholarship and officer commission.

Lieutenant Colonel Johnson was commissioned as an Aviation Officer in 2001 from Minnesota State University, Mankato where he earned a Bachelor of Arts degree, and was recognized as a Distinguished Military Graduate. He is a graduate of the U.S. Army Command and General Staff College and holds a master’s degree from Georgetown University’s McCourt School of Public Policy.

Lieutenant Colonel Johnson and his wife Teresa have four children aged 5-12, and are both natives of Southeast Minnesota.