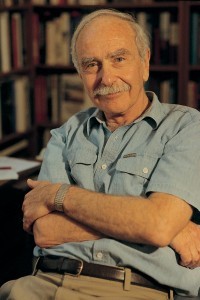 March 24, 2016--A scholar specializing in U.S.-East Asia relations and member of the Council on Foreign Relations, Warren I. Cohen, Distinguished University Professor, Emeritus, University of Maryland, Baltimore County, will visit the University of Wisconsin-River Falls April 7-8 to present two public lectures and a discussion as part of the annual Wyman Visiting Professorship in History event.

On Thursday, April 7, Cohen, Senior Fellow at the Woodrow Wilson International Center for Scholars, will present a lecture, "Chinese-American Relations in Historical Perspective," from 4-5:30 p.m. in the Kinnickinnic River Theater of the University Center at UW-River Falls. A public reception begins at 3:30 p.m. The event is free and open to the public.

In his presentation, Cohen will discuss the evolution of U.S.-China relationship in the past 150 years. He will argue that as fluid as American-China policies have seemed to be, one recurring theme in the history of U.S.-China relationship is that a friendly, cooperative China will be assured of the American support and a China perceived as a potential enemy will not. He backs up his argument with a few critical historical moments including the Opium War of 1842, the formulation of the U.S. Open Door policy in China, Chinese Republican Revolution in 1911, WWII, the Korean War, Nixon's visit to China in 1972, and the rise of China as a global economic power at the present time.

On Friday, April 8, from 2-4 p.m., Cohen will host a roundtable discussion of his most recent book, "The Challenge to American Primacy, 1945-Present," in the Davee Library breezeway at UW-River Falls. This discussion is free and open to all.

Also on Friday, April 8, Cohen will present his second lecture, "The Golden Age of East Asian Art Collecting in the U.S.," at the River Falls Public Library, 140 Union St., River Falls, from 7-8:30 p.m. with a public reception at 6 p.m. The event is free and open to the public.

In this lecture, Cohen will argue that economics of art collecting, chaotic political conditions in China in the early 20th century and the American occupation of Japan after WWII combined to create the golden age of Asia art collecting in America during the second half of the 19th century and the first half of the 20th century. He examines the historical background against which the Boston Museum of Fine Arts, the Seattle Art

Museum and the Nelson Gallery in Kansas City acquired their Asian art collections and the connoisseur's career of Charles Freet, John Ferguson and Langdon Warner.

To learn more about the Wyman Visiting Professorship in History and the Wyman legacy at UW-River Falls, visit https://www.uwrf.edu/HIST/Events/WymanHist/Index.cfm.

For more information, call the UWRF History and Philosophy Department at 715-425-3164.