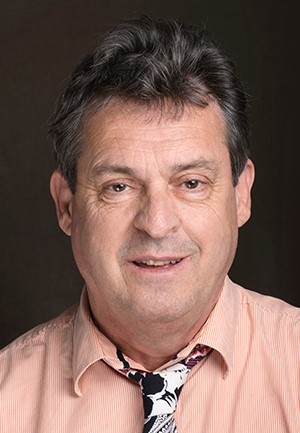 September 15, 2016 -- Geology Professor Ian Williams is the recipient of the 2016 Distinguished Teacher Award at the University of Wisconsin-River Falls, the highest award bestowed on campus.

Since its inception in 1965, 53 faculty have been honored with this award. Nominations for the award are solicited from graduating seniors and recent graduates. This is the second university honor in just two years for Williams, who in 2015, was named the UWRF Adviser of the Year.

Williams, of River Falls, is a native of London, England. He has been involved in teaching as long as he can remember. His father, a physicist, who taught at several institutions in the United Kingdom, encouraged Williams in his desire to teach and, by example, showed him both the joy and responsibilities of the profession.

Williams enjoys the fun of learning, yet takes his role as a teacher seriously, as exemplified in the comments shared by students in their nominations.

"Ian has always gone out of his way to help students in any way possible," said one student.

A second student said, "Office hours or not, he always welcomes questions and never discourages anyone from coming to him."

William's passion for his students is well known and may have been best described by a student who nominated him in 2015 stating "He will charge hell with a bucket of water for his students."

Williams holds a BS from Durham University in North East England, an MS from Newcastle University in Newcastle upon Tyne, England, and a Ph.D. from the University of California at Santa Barbara. He brought his expertise is in geophysics to UWRF in 1982, and has since taught a wide range of geology courses. He is an avid traveler who has not only led many of the annual regional geology field trips, but has been heavily engaged in the Semester Abroad: Europe, the Wisconsin in Scotland and International Traveling Classroom (ITC) programs.

In fall 2015, Williams led the Semester Abroad: Europe program for the second time, helping students in a variety of research projects in disciplines including geology, psychology, art, business and animal science. Being able to assist student in areas other than geology drew Williams to the Semester Abroad: Europe program. As a native European, Williams is a good fit for the program and his prior experience traveling in Europe gives him a background valuable to students in the program.

The Semester Abroad: Europe program has been led for more than 50 years by a diverse group of faculty from across campus, a cross-disciplinary approach to teaching that Williams strongly supports. His involvement in the ITC program included teaching Geology 101 in the Pyrenees, where he used the mountain chain to put the ideas in Geology 101 to the test.

In fall 2017, Williams is preparing to teach three different geology classes in the Experience Scotland program.

"Ian has a keen interest and unique ability in helping students understand and appreciate important geological processes," said Don Taylor, soil science professor and chair of the Plant and Earth Science Department. "He is dedicated to the success of his students, both in the classroom and in their preparation for meaningful careers."

Williams was honored September 13 during a reception on campus. A plaque of his likeness was added to the wall of Distinguished Teacher honorees in the Wyman Education Building. In his comments at the reception, Williams noted that he feels he is part of an amazing team here at UW-River Falls. He concluded his remarks by offering a toast to his "excellent colleagues, wonderful friends and their teamwork."