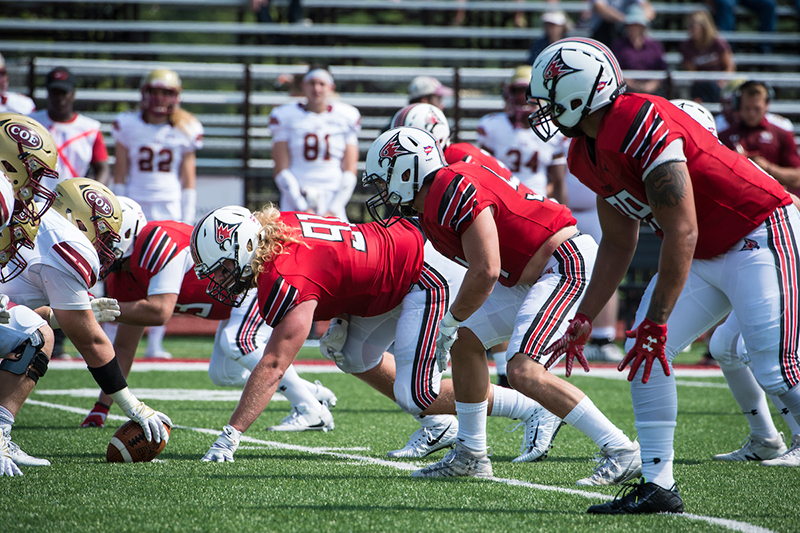 Sept. 18, 2017-- Ugel George is a sophomore defensive lineman for the University of Wisconsin-River Falls football team. The Falcons are three weeks into their playing schedule, but it would be easy to excuse George for not having his thoughts fully on football in recent days.

George is a native of the U.S. Virgin Island of St. Thomas, where his family still lives. Like virtually everyone in the Caribbean, George’s family is dealing with the aftereffects of Hurricane Irma. Irma made landfall in St. Thomas as a Category 5 storm on Sept. 6, causing catastrophic damage across the small island with a population of just 52,000.

George and his teammates will hold a donation drive for Virgin Islands families affected by the hurricane on Tuesday, Sept. 19, at the David Smith Stadium at Ramer Field ticket office from 5:45 to 7 p.m. Smith Stadium at Ramer Field is located at 267 Emogene Nelson Avenue in River Falls. The team is asking the public to bring new or lightly-used shoes and clothing for all ages. UW-River Falls players and coaches will be on hand to assist with collecting donations.

"George’s first-hand connection to the damage caused by Hurricane Irma has made this cause a priority for our football family,” said Matt Walker, UW-River Falls head football coach. “It has driven us to raise awareness and generate support, for the people of the U.S. Virgin Islands.”