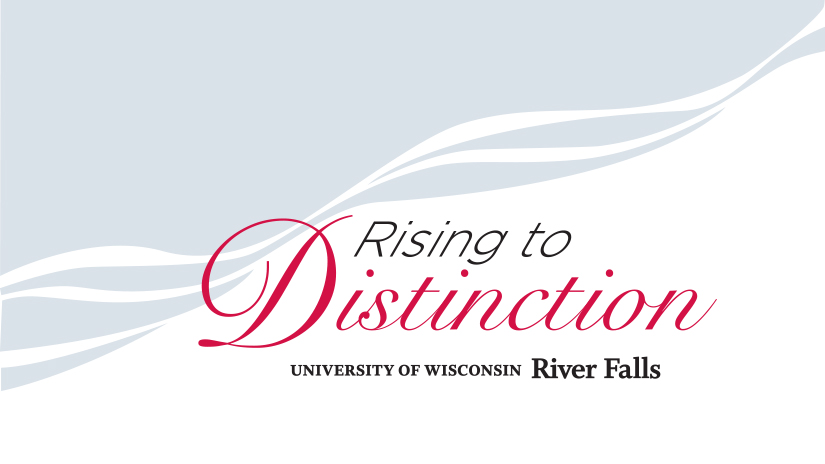 The Rising to Distinction Campaign, which is the university's first comprehensive fundraising campaign, was launched in 2011 to help UW-River Falls pursue the goals of its new strategic plan. Private support provides increased funding for student scholarships, improved and enhanced learning opportunities, and new facilities. With a goal of reaching $20 million by June 30, 2016 – the campaign fundraising effort well exceeded expectations, reaching that milestone six months early.

"The success of the Rising to Distinction Campaign, made possible by the generous support of our alumni and friends through the UWRF Foundation, represents a milestone in the university's history," said Chancellor Van Galen. "The impact of the campaign will be great, providing support for our strategic goals and helping us to provide high-quality, affordable educational opportunities to current and future students. I am deeply grateful to those who helped make this moment possible."

"When we started this journey we weren't sure where or when it would end," explained Campaign Chair Bill Boehm, '70. "Surpassing the original goal is an accomplishment to be celebrated. Plus we've begun to build a base and developed a degree of confidence that private support can be an increasingly important part of the future for UWRF."

Ten Thousand Donors
To date 10,153 unique donors have paid and pledged $20.2 million to bring the university's vision to fruition. It is only through these generous gifts that UW-River Falls will be able to pursue the goals of its new strategic plan, Pathway to Distinction, which includes:

Perhaps most incredibly, more than 91 percent of pledges, which is well beyond the national average, have already been paid.

"Not only is reaching the goal a monumental accomplishment, but having so many pledges fulfilled has already had tremendous impact on the university," said Chris Mueller, UWRF assistant chancellor of University Advancement and president of the UWRF Foundation. "This is a clear sign of the importance of the university to those who support it."

Widespread Impact
From student scholarships to academic program and faculty support to infrastructure improvements throughout campus, the $20 million that has been committed supports very specific initiatives across the university.

A few of the many highlights of the initial campaign to date include:

More to Accomplish
While pausing to celebrate and acknowledge this stellar accomplishment, university and campaign leaders also emphasized that much remains to be done before the official June 2016 close of the campaign, and beyond.

"Whenever a campaign goal is met, there is the tendency to feel that the work is accomplished," said Mueller. "In reality, while we have surpassed the original goal, we still have priorities and commitments that need to be met. The campaign has raised the bar on what we can accomplish through fundraising at UW-River Falls, and we must continue to achieve this level of funding for the university to be successful."

Generous Gifts
An influx of gifts at the end of 2015 enabled UWRF to cross the $20 million threshold six months before the June 30 campaign conclusion. One of those commitments is from the RCU Foundation for the RCU Foundation Community Room in the soon-to-be-completed Falcon Center.

Other notable gifts include:

Campaign Celebration Planned
A campaign celebration event scheduled for Sept. 23 is already in the initial planning stages. All those who contribute to the Rising to Distinction Campaign will be invited to attend. The event will highlight the many ways that private philanthropy has had an impact on the UW-River Falls campus.

For more details about the campaign, visit www.uwrf.edu/RisingToDistinction.