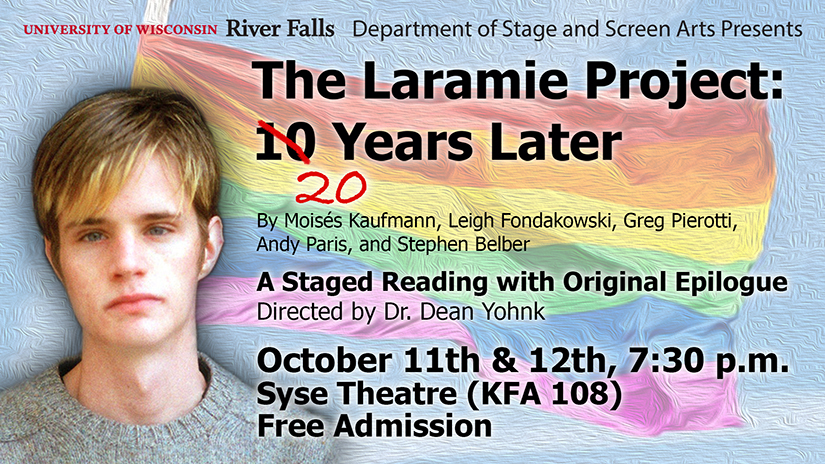 October 3, 2019 - A staged reading of “The Laramie Project: 10 20 Years Later,” directed by the Dean of the College of Arts and Sciences Dean Yohnk will be performed October 11 and 12 at 7:30 p.m. in the Syse Black Box Theatre in the Kleinpell Fine Arts building. Admission is free.

The brutal 1998 hate crime murder of 21-year-old gay University of Wyoming student Matthew Shepard brought playwright Moisés Kaufman and fellow members of New York’s Tectonic Theater Project to the town of Laramie in search of answers. The nation’s and world’s attention were focused on this highly publicized hate crime.

The resulting 2000 award-winning play “The Laramie Project” tells the powerful story of Matthew who was kidnapped, severely beaten, and left tied to a fence in the middle of the prairie outside Laramie, Wyoming because he was gay. In their original script, Kaufman and Tectonic Theater members constructed a deeply moving theatrical experience from these interviews and their own experiences in Laramie.

Ten years after their initial visits and interviews, Kaufman and the Tectonics returned to Laramie to find out how much the city and its residents had changed in the ensuing decade after Matthew’s murder, the result of which was “The Laramie Project: 10 Years Later.” This staged reading of “The Laramie Project: 10 20 Years Later” will also include a new original prologue and epilogue created by Dean Yohnk which will include important texts from the ceremony when Matthew’s remains were interred in the National Cathedral in Washington, D.C. on the 20th anniversary of his murder in 2018. The cast consists of:

The production is also part of National Coming Out Day and month. Oct. 10 is the 21st anniversary of Shepard's death, which ultimately led to the Matthew Shepard and James Byrd, Jr., Hate Crimes Prevention Act of 2009. There will be a post-show discussion related to LGBTQ+ hate crimes with the cast and Wiesen-Martin following both performances.