April 2, 2013 --Ben Borgardt, a junior majoring in agricultural engineering technology at the University of Wisconsin-River Falls (UWRF), was named the 2013 Agricultural Engineering Technology Student of the Year. The award is present annually by the Wisconsin Chapter of the American Society of Agricultural and Biological Engineers (ASABE). Borgardt, from Pickett, received the award at the ASABE meeting on March 27, held in conjunction with the WPS Farm Show in Oshkosh.

At UWRF, Borgardt is involved in the ASABE International Quarter-scale Tractor Student Design Competition, leading the X-Team that will travel to the competition in June. Borgardt and two other team members, Alex Schoonover of Oshkosh and Dylan Young, Poy Sippi, had the X-Team tractor on display at the UWRF booth at the WPS Farm Show.  Borgardt is currently vice-president of the Falcon Pullers and a past president of the Agricultural Industry Club.

In January, Borgardt attended the 2013 ASABE Ag Connect Expo and Summit in Kansas City, Mo., with the support of a scholarship from Claas of America.  This summer and fall he will be interning with New Holland Agriculture, before returning to UWRF to complete his degree. 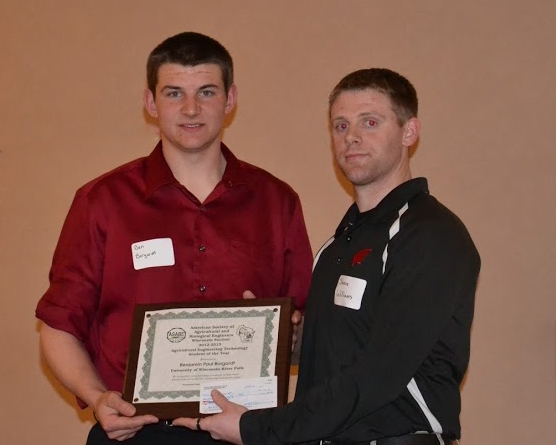