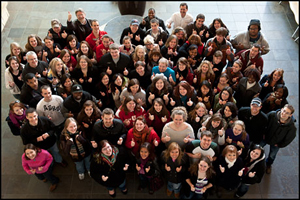 Behind only Ithaca College and Cornell University, UWRF sent 92 students to the conference, and chartered their own flight to New York.

“It was a great trip. For some, it was their first plane ride,” says Molly Van Wagner, UWRF director of Grants and Research.

NCUR features multidisciplinary research, including the sciences and the arts where students present their projects in the form of a poster, as an oral presentation or an art exhibit. Whichever way they chose to present, students fielded questions and explained their project and methods to conference attendees.

“It was obvious to me that the skills learned and the opportunities presented to students were very valuable. I could see a difference in the students from the beginning to the end of the conference. They had raised confidence and were excited to do more research,” says Van Wagner.

Students from UWRF also spent time learning from each other at the conference.

“They really supported each other,” says Van Wagner. “When they weren’t presenting their own research, they were attending the presentations of other UWRF students.

UWRF conference attendees presented a wide range of topics such as “Development and Characterization of Artificial Brain Tumor Tissues Using 3D Tissue Engineering Approaches and Both Primary Human Tumors As Well As Glioblastoma Cell Lines,” “Before the Genocide: The European Colonization of Rwanda,” “Jet Fuels From Microalgae: Genetic Engineering of Dunaliella For Biofuel Production” and “Cather, Impressionism, And The City.”

Van Wagner, several faculty and staff members, and Chancellor Dean Van Galen, who offered a challenge of an “easy 5K run” to the group once they arrived in New York, accompanied the students. Several students also rented a car to tour New York City for the first time.

Of the 92 students in attendance, three students went to the conference in order to gain experience for the next NCUR, which will take place at Weber State University in Ogden, Utah, March 29-31, 2012.

Nine students also were able to present to their state legislators in Madison, including Senator Sheila Harsdorf and Representative Dean Knudson on April for the 2011 Posters in the Rotunda: A Celebration of Undergraduate Research event. Held at the State Capitol, legislators from each student’s home area viewed and learned about their research.

The National Conference on Undergraduate Research was established in 1987 and promotes undergraduate research, scholarship and creative activity in all fields of study through the sponsorship of an annual conference for students.

Photo: Some 92 UW-River Falls students gathered at the University Center the morning before leaving for the National Conference on Undergraduate Research at Ithaca College in New York March 31-April 2.