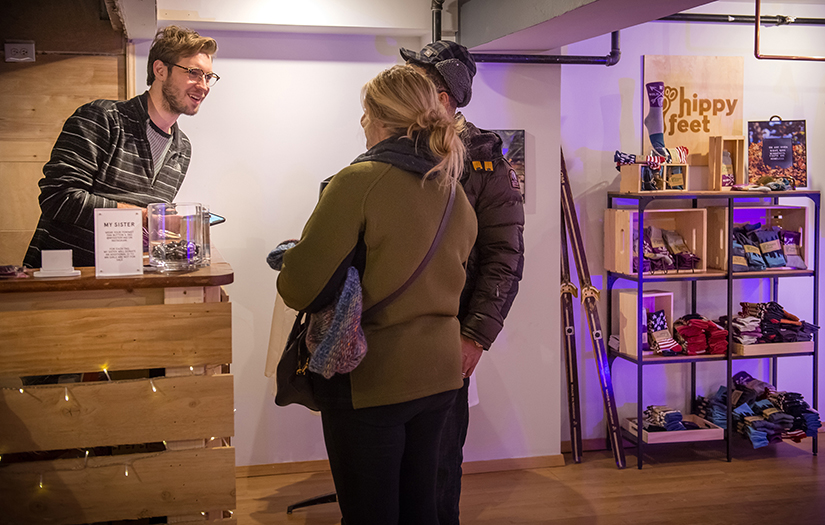 Michael Mader, CEO of Hippy Feet, talks with customers in the pop-up shop and warming house just off Nicollet Mall in downtown Minneapolis where for 10 days leading up to the Super Bowl, he is selling Hippy Feet socks and raising awareness of homelessness.

February 1, 2018--The New England Patriots and Philadelphia Eagles may be ready to meet Sunday in Minneapolis in the Super Bowl, but one graduate of the University of Wisconsin-River Falls is more concerned about those who have no home field – or home – to call their own.

Michael Mader has formed a thriving e-commerce business known as Hippy Feet. It’s dedicated to serving the homeless, and he’s using the Super Bowl buildup to get his message across.

“We have a pop-up shop and warming area open in downtown Minneapolis and it’s been great for raising awareness,” Mader said. “It’s also good to see local businesses making an impact during Super Bowl week.”

Hippy Feet is a general benefit corporation. Companies of this type must show a positive impact on society in addition to profit as its legally defined goals. The company’s benefits are important.

For each pair of socks the company sells, another pair is donated to a homeless shelter – but the good work doesn’t stop there. The homeless can also receive temporary employment and leave with cash in their pockets.

“For some people, it’s the first stepping stone of many,” Mader said.

Socks are the most requested item at homeless shelters.

“At this time of year if you don’t have socks, you have a lot of potential problems,” Mader said. “You walk to stay warm and without socks you can get blisters, or other serious health issues like trench foot.”

“That’s great because it promotes mission and helps drive traffic to our store,” Mader said. “People can track our progress. In 18 months, we’ve donated about 11,000 pairs of socks.”

Mader, of Woodbury, Minn., graduated with a marketing major from UW-River Falls in 2016.

“I never had an internship, but wanted a marketing degree,” he said. “I wanted to make an impact on the world.”

A traumatic brain injury Mader suffered in 2015, however, put his plans on hold.

“I was in the hospital for three months and some people thought I should drop out,” he said. “Instead, I started writing a business plan for a stock company. I wanted a positive change in the way I was living and to help change the way people around me live.”

Mader entered Hippy Feet in the UW-River Falls Innovation Challenge undergraduate business program in 2016 and won $27,000 in grants. Now, he’s working with Microsoft, making custom socks in a corporate gift package for employees in Fargo, N.D., which will double the number of donated socks the company can make available.

“We can give a pair of socks to every homeless person in North Dakota when we’re done with this,” Mader said. The company also works with mysister.org, which raises money and awareness to prevent sex trafficking through apparel.

But what do visitors to Mader’s warming house say?

“They love the idea,” he said. “We have a place and a lounge for people to come in, sit down, hand out, and just be casual while they learn about us.”

For Mader, the local aspect of his business is especially important.

“At the Super Bowl, we’re competing with the Nikes of the world, Tostitos, Sleep Number, people spending big money to be a part of the atmosphere,” he said. “I’m glad we can provide local vendors to have a piece of the pie and give Minneapolis-based companies a chance to be seen.”