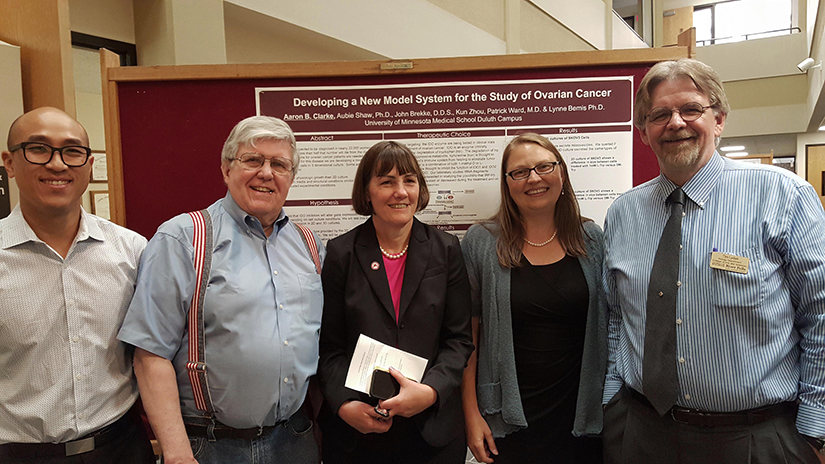 During the summit, Lyden presented ongoing 3D cancer modeling research to the public. In concert with staff from BRTI LifeSciences, LLC, samples of 3D artificial tumor structures developed at UW-River Falls with the BRTI product Cell-MateTM as well as natural scaffolds and hanging drop spheroids were shown. About 65 attendees were able to view and explore actual skin and breast cancer samples as in-vitro artificial tissues using stereo microscopes.

The research, developed by Lyden, as the director the UW-River Falls Tissue and Cellular Innovation Center (TCIC), is the continuation of summer 2015 research involving four TCIC Team Brazil exchange students. The research is now the focus of a new student researcher, with Lyden as mentor and project developer, in the 2016 UW-River Falls Summer Scholars Program.

"Just as new technologies and toolsets had to be developed during the early 1960s to make the original Moonshot possible, new technologies and insights are now needed to power the current Cancer Moonshot in the 21st century," said Lyden. "Small-scale tissue engineering and 3D modeling of cancer is just such a new technology and provides us with never before available toolsets that will power breakthroughs in our understanding of cancer and eventually lead to new treatments for this dreaded disease."

The Duluth Cancer Moonshot Summit is part of Vice President Joe Biden's National Cancer Summit, including conversations in communities across the United States. These summits were the first time that individuals and organizations representing the entire cancer community and beyond -- philanthropists, data and tech experts, advocates, patients and survivors -- convened under the national charge to double the rate of progress toward a cure.

Lyden's TCIC laboratory has been engaged in 3D artificial tissues and tumor work since 2004, when it started using natural matrix materials to generate very complex and structurally sophisticated cultures. In 2008, the TCIC began to shift its focus primarily to artificial tumor tissues and in 2013 it became a "beta test-site" for BRTI, LLC and their newly developed synthetic matrix material Cell-MateTM  Lyden and his researchers have been testing it with breast cancer cells ever since. Several individual and/or groups of UW-River Falls students have participated in these and other ongoing research projects.

Lyden has been working since 2008 with John Brekke, DDS, the inventor of Cell-MateTM and now the CSO of BRTI, LLC for several years. Lyden and his researchers have been actively using their product and developing its applications in tumor research since 2013.

"I have a long personal interest in cancer research," Lyden said, "as this disease has impacted my family several times over my lifetime. After moving to UW-River Falls and working to develop a research program involving undergraduates, I discovered the application of natural matrix materials to generate very complex and long-lived artificial tissues in about 2004. With that toolset developed, I decided to turn much of my research attention to modeling various cancers with these tools."

After meeting the inventor of Cell-MateTM in 2008 when Brekke attended the first TCIC regional matrix meeting, "I began to explore adding his matrix to our overall set of approaches," Lyden said. "In 2014, we began to focus down our overall efforts onto a limited number of tumor-types including breast, colon and melanoma. Our Cell-MateTM work has, so-far, been limited to breast cancer and matching normal control tissues."

The most recent twist to the story is that this year's summer project has been exploring the relationship of breast cancer and normal cells to adjacent "stromal" cells called fibroblasts, according to Lyden.

"This is a very important and exciting new area of cancer research generally, that is already bearing fruit in terms of an enhanced understanding of the disease," Lyden said. "Our new work this summer is generating many exciting new observations as well and further confirming the potential impact of these 3D modeling tools in future cancer research."