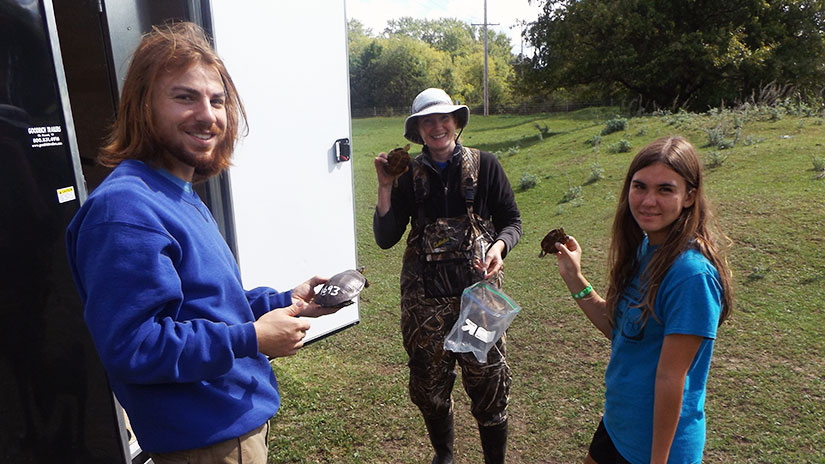 L-R: Jon Burich, a sophomore from Newport, Minn.; Assistant Professor of Environmental Science Jill Coleman Wasik; and Gabrielle Chapin, a freshmen from Woodville, working on the TurtlePop Study during the Kinni Blitz event at UW-River Falls.

September 22, 2016 -- Environmental science faculty at the University of Wisconsin-River Falls welcomed students back to campus this fall with a unique event – a Kinni Blitz. The Kinni Blitz was a 24-hour effort to measure everything they could think of in the South Fork branch of the Kinnickinnic River that runs through campus.

Jill Coleman Wasik, assistant professor of environmental science and Kevyn Juneau, assistant professor of conservation and environmental planning created and led the effort. They wanted a fun way to help environmental science students get to know each other better while helping them develop their technical skills at the same time. Coleman Wasik and Juneau made it easy for the students to participate by taking care of the logistical details, including camping equipment and food.

At 4 p.m. Friday, Sept. 9, 15 students gathered in a classroom in the Agricultural Sciences building and prepared to head outdoors for the 24-hour challenge. After some training time, teams of students took measurements of water quality every couple of hours. They measured dissolved oxygen, temperature, conductivity, pH and turbidity. Water samples were also collected each time and brought back to the base camp where they conducted some simple chemical analyses.

The group also participated in an ongoing research project focused on turtle populations. They trapped turtles, determined their sex and species and took physical measurements before releasing them. This study is part of a larger initiative, the TurtlePop Study under the umbrella of the Ecological Research as Education Network (EREN), which includes 37 universities across the country. Globally, roughly 45% of freshwater turtle species are listed as threatened. The TurtlePop Study is an effort to better understand how their populations respond to land use and habitat change across an urbanization gradient so improved conservation strategies can be developed.

In between taking measurements, the students and faculty got to know one another over dinner and conversation around a campfire. Coleman Wasik and Juneau were pleased with the results of this first Kinni Blitz and hope to make it an annual event. Their general observations and feedback from participating students confirmed that students learned more about some of the opportunities available to them in the environmental science program and formed new friendships.

"I really appreciated getting to know everyone – the professors, upperclassmen and fellow first-years," said Paul Tietz, a freshman from Waunakee. "Hearing about the research projects upperclassmen are working on was also really interesting."

"We were able to get our hands dirty and find out some of the activities that we can look forward to doing both in our future careers and in the remainder of our time at UWRF," said Alexandra Spaulding, a senior from Merrill. "It was also a really great bonding experience for both students and professors."

The group camped near the pond in the horse pasture that is part of the Campus Farm. Curious horses provided some interesting moments during the evening. One horse attempted to see if the tents were edible, leaving a hole to be repaired later. Others left their nose prints on the hood of Coleman Wasik's vehicle.

Environmental science is the broad study of earth's natural and human-impacted environments (air, water, and soil across wild, rural, and urban landscapes) and how organisms and processes respond to natural and human-caused changes.