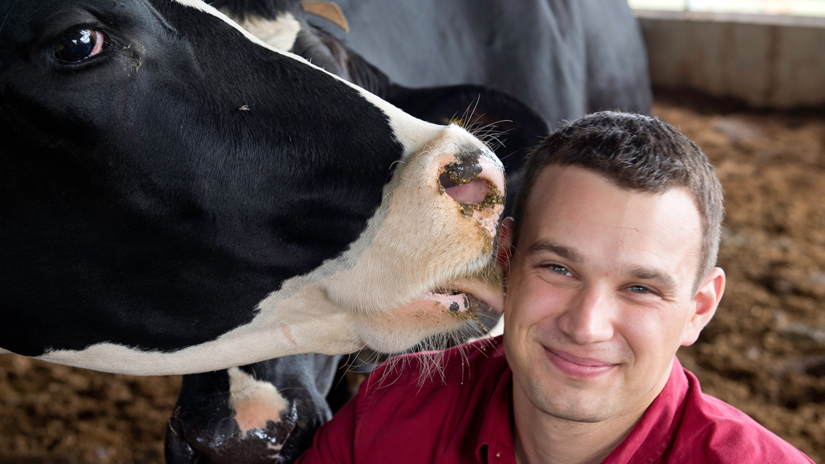 November 21, 2016 -- Kurt Vogel, associate professor of animal science at the University of Wisconsin-River Falls was named one of the 25 Future Icons in the November 2016 issue of The National Provisioner magazine. As part of their 125th Anniversary celebration, the editorial board of the magazine took on the challenge of identifying 25 individuals they expect to change the industry over the next decade or two.

"Being named a future icon was a great honor and quite a surprise," said Vogel.  "There are several people that I would have nominated for this honor if I had the chance because they have been models for how I try to do things.  I've always been a believer in letting the results of my work speak for the quality of my effort.  With that in mind, there is a lot to do to fulfill the expectations that go along with being identified as someone that will have a substantial influence on the future of animal welfare in the meat industry.  I'll continue to give it my best."

"We are very pleased to have an animal science faculty member who is nationally recognized as a leader in his discipline," said Gary Onan, chair of the Animal and Food Science Department. "This award will certainly help Dr. Vogel achieve his professed goal of making the University of Wisconsin-River Falls animal welfare program the "best in the nation." We wish Kurt all the best as he pursues that goal, and continues his strong commitment to our students."

In 2014 Vogel was named the Kraft Foods/Oscar Mayer Faculty Scholar when the Oscar Mayer brand established a partnership with UW-River Falls.  This collaborative effort is facilitating development of additional animal welfare courses in the animal science program and supporting research in the area of food animal welfare.  The focus is on training the next generation of animal welfare leaders, including farmers, scientists, processors and veterinarians.

Vogel received his BS and MS degrees in animal science from the University of Wisconsin-Madison.  He earned his PhD in animal science from Colorado State University, under Temple Grandin. Vogel joined the UW-River Falls Animal and Food Science Department in 2011, where he has taught animal welfare, quantitative animal welfare assessment, meat and meat products, and animal physiology.  He is very involved in undergraduate student research, and he and his student collaborators have received five Undergraduate Research, Scholarly and Creative Activity grants from UW-River Falls since 2013. Vogel serves as coach for the Animal Welfare Judging team that was the high scoring team in the Live Assessment component at the annual intercollegiate Animal Welfare Judging and Assessment competition earlier this month. He is also the faculty advisor for Alpha Zeta – Wisconsin Gamma chapter, a professional honor society for students and industry professionals in the agriculture and natural resources fields.