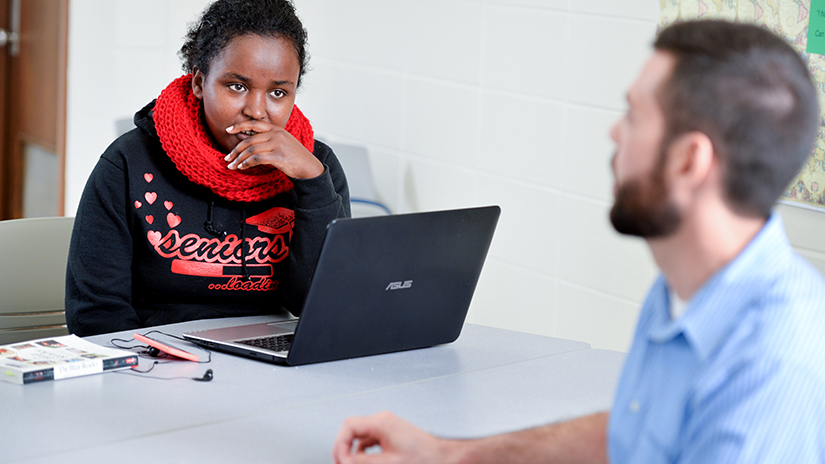 March 17, 2016 -- The number of English Language Learners (ELLs) in west central Wisconsin, the Twin Cities, and the world, is on the rise. It is no surprise then that the University of Wisconsin-River Falls campus population is changing and the university is changing with it. As new programs are developed to help support ELLs by providing strategic support and opportunities for academic success, one program, with a current retention rate of 100 percent, rises to the top.

The UWRF Pathways Program is designed to support first-year students for whom English is not their first language and who have a lower ACT score due to developing English proficiency. The Pathways Program assists students as they adjust to university academic expectations, while taking into consideration their emerging English language proficiencies. In the two-semester program, students take three general education courses and two academic support courses each semester. The credits earned in the academic support courses count toward a student's cumulative GPA but not toward his/her degree.

The Pathways Program highlights an inclusive classroom model providing students with extensive academic support enabling them to be successful within their general education classes.

"The general education professors, Bradley Caskey (Psychology 101) and Angela Siwik (Journalism 101), do not modify or adapt the material based on the presence of the Pathways students," said Diane Jacobson, director of the Pathways Program. "They are able to teach the classes as they normally would and there are non-Pathways students in those general education classes, too."

"Although the content in the course was virtually identical to general psychology classes that I have taught over the course of my 31 year career, the presence of the Pathways students in the classes added something quite meaningful to many discussions because of the diversity of their life experiences and cultural heritage when compared to many of the non-Pathways students," Caskey said.

As part of the Pathways Program plan for success, ESL instructors meet weekly with the professors to plan for the upcoming content and to discuss any student issues or concerns.

"I think the Pathways program set-up is something that contributed to the students success and the retention rate," said Jacobson. "If they needed more time to understand something or needed someone to explain something in a different way, they had more professors and more time to address that."

Students in the program currently represent seven different cultures/nationalities, including Hmong, Filipino, Latvian, Ethiopian, Nigerian, Somali, and Karen. Some were born in the United States, while others had been in the U.S. less than two years. Student majors vary in scope, too, with everything from social work, psychology, and exercise and sports sciences to biology, music education, business administration, sociology, and international studies.

To help ensure the students success, Jacobson works closely with different offices on campus to be sure that the students are addressing issues before they became problems - problems that could potentially cause a student to become frustrated and eventually drop out.

"Working closely with the Financial Aid Office was critical," said Jacobson. "Most of the Pathways students are first generation students whose parents may or may not be able to help them understand the financial aid process both because the parents never attended college in the U.S. and because often they do not speak English."

"I am not only their adviser," she said. "I am also their instructor, so I see them daily and know exactly what their grades are or what they are struggling with. I can immediately connect them to the proper office on campus so that they can get the support they need before an issue becomes a problem. If it does become a problem, I am there to assure them that it is not an insurmountable issue."

Jacobson is convinced that it is the thoughtful and strategic framework of the Pathways Program along with its unique in-classroom model, problem-solving focus, and personalized student advising that has allowed this program to realize an unprecedented 100 percent retention rate.

"The Pathways Program helped me with my psychology class – how to prepare for tests, memorize vocabulary, and use different study methods," said Wade Saw, a student enrolled in the Pathways Program, who is originally from Thailand and has been in the U.S. for 11 years living in East St. Paul. Saw knew that the Pathways Program was instrumental to his success at the university and chose UWRF specifically because of this program.

Long Vue is also a student in the Pathways Program and although he has lived in the U.S. his entire life, English is not his first language.
"Both of my brothers came here and graduated with biology degrees," said Long Vue. "I wanted to be in the biology program, too."

Vue credits the Pathways Program for helping him to develop better study habits allowing him to succeed in his chosen biology major.

There is a combination of factors that allow a student access to the Pathways Program. True to the program plan, the personalized advising starts right away with all qualified potential applicants receiving a phone call from the UWRF Multicultural Admission Officer Pedro Renta to inform them about the program and how it will help them achieve their academic goals. Prospective students can then indicate their desire to pursue admissions to UWRF through the Pathways Program.