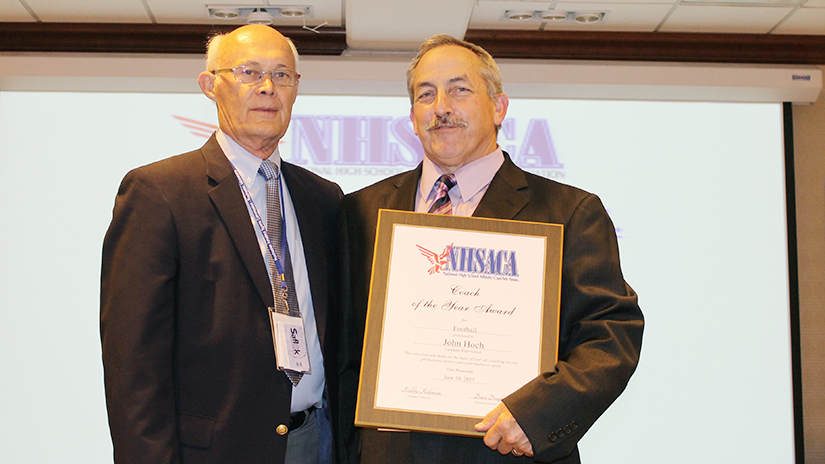 July 20, 2015 -- A national coaches organization has named John Hoch, a University of Wisconsin-River Falls Hall-of-Fame football player, their 2015 Football Coach of the Year.

Hoch is a 1981 alumnus of the physical education program and a former Falcon football and baseball player. He is the head football coach at Lancaster High School. Earlier this year, Lancaster's team won the Wisconsin Interscholastic Athletic Association Division 5 state championship by defeating Amherst 41-21. It was the fourth consecutive time his team, the Flying Arrows, made it to the state finals.

Hoch got the news he'd been selected at a ceremony in Rochester, Minn.

"It was very exciting," he said. "I'm originally from the La Crosse area so a lot of my family got to attend."

Hoch has a record of 283-96 at Lancaster, with seven state titles and four runner-up finishes. He is also a past president and inductee of the Wisconsin Football Colleges Association.

In his time at UW-River Falls, Hoch, a wide receiver, earned letters in football from 1976 to 1979. He played in the outfield and pitched for the UWRF baseball team, earning letters from 1977 to 1978. Hoch has also been named Associated Press Coach of the Year and the National Federation of State High School Associations National Football Coach of the Year.

He attributes his success as a high school coach, in part, to Mike Farley, who coached the Falcon football team for 18 years. He called Farley an inspiration.

Hoch also said he's been successful because of his coaching staff and the greater Lancaster community.

"I believe in kids," he said. "It's important to communicate with them. I have a good coaching staff and a community that believes in what we're doing."

Hoch is only the second Wisconsin football coach to receive the award in the 50-year history of the association. He was selected from a group of eight finalists based on his cumulative years of success in football coaching.

For more information, contact Beth Schommer, executive assistant to the Chancellor, at 715-425-0662 or beth.schommer@uwrf.edu.