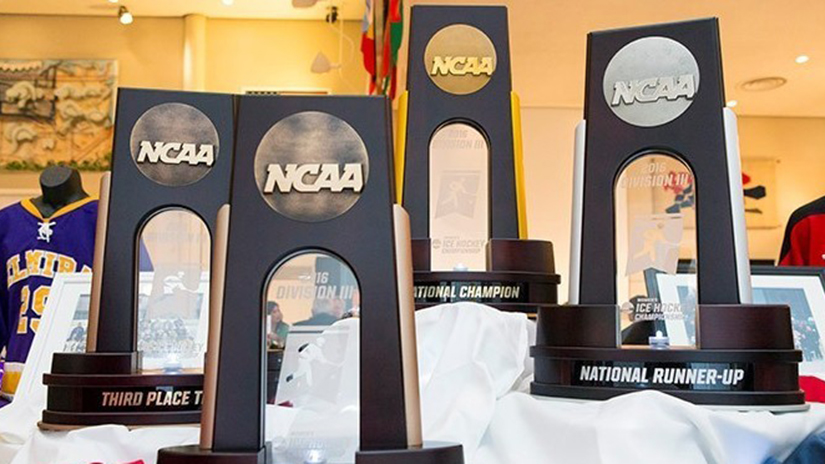 PLATTSBURGH, N.Y. – The 2016 AHCA/CCM Division III All-Americans were unveiled at the Frozen Four banquet on Thursday night. Three Falcons were named to the All-American team.

Senior Chloe Kinsel headlined the Falcon selections with first team honors. Junior forward Dani Sibley and junior defenseman Paige Johnson were named to the second team. Kinsel and Johnson are both repeat selections to the All-American team as both were also named in 2015.

Chloe Kinsel was named WIAC player of the year earlier this month and was the first player in program history to earn that honor. Kinsel has broken school  records in goals and points scored. She currently ranks 4th in the nation with .86 goals per game and 10th in the nation in points per game.  Kinsel has scored 24 goals this season and has recorded 43 points.

Dani Sibley was named first team All-WIAC earlier this month. Sibley ranks 15th in the nation in points per game and 12th  in goals per game. Sibley has scored 20 goals this season and is tied for 2nd in the nation with 3 shorthanded goals on the year. She has scored 7 goals and tallied 2 assists in her last 5 games.

Paige Johnson was named first team All-WIAC earlier this month. Johnson leads the Falcons in plus/minus with a +33 rating on the season. Paige ranks 13th in the nation in points by a defensemen with 17.

The Falcons play Elmira in the Frozen Four on Friday night at 7 p.m. EST.

The full list of All-Americans can be found here: 2016 ACHA/CCM DII All-American release.