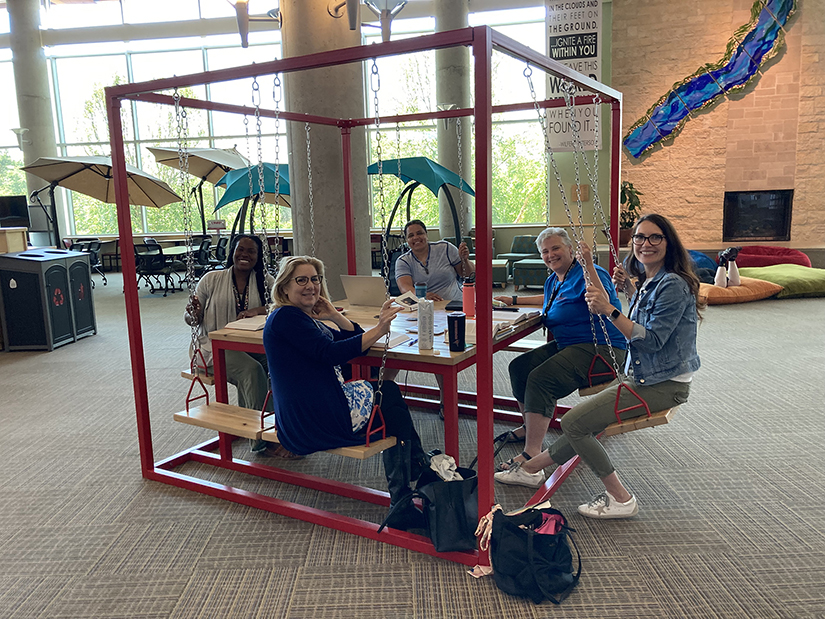 Members of the first class of UWRF doctoral candidates in Montessori studies meet to work on a class project at the University Center.

For the past two weeks, Williams, who is the head of the school and lead elementary guide, has been at University of Wisconsin-River Falls as part of a residency component for her Doctor of Education degree, the university’s first doctoral program.

The Ed.D. program in Montessori Studies at UWRF is a hybrid program - online and summer residencies. It is one of the first such programs in Montessori studies in the United States.

“It’s been amazing,” Williams said of the residency. “It has been much more than I expected in terms of the collegial relationships and the friendships I have developed with my fellow classmates. I didn’t understand this was the first doctoral program for the campus. It just added another level. We are here to bring our A-game. It is a new endeavor for Montessori. We are not only here to learn more and to share Montessori’s words and dictates. We hope to do what a doctorate is all about. We’re here to create.”

Although the Montessori pedagogy and philosophy have been around for over 100 years, there have been very few doctoral programs in the world that have focused on the Montessori method of education. The method emphasizes the importance of dignity and respect for the individual and the potential for students to become the best people they can be and contribute to the world.

Maria Montessori was an Italian physician, educator and innovator. She opened the first Montessori school in Rome in 1907. She graduated from medical school in 1896, one of the first female physicians in Italy. She opened a full-day childcare center in a poor inner-city district of Rome, the first of its kind. Using scientific observation and experience, Montessori designed learning materials and a classroom environment that fostered the children’s natural desire to learn and provided them the freedom to choose their educational materials.

Fourteen students from across the nation have enrolled in the UWRF inaugural doctoral class. They started their two-week residency on June 18, classes started on June 20.

UWRF started the Master Montessori Program in 2012. There are fewer than 10 university-based such programs in the nation. The program is accredited through the Montessori Accreditation Council of Teacher Education (MACTE). The university is one of only two public universities in the U.S. that offer Montessori teacher education programs.

When she first heard about the program three years ago, she immediately signed up to get updates so she could be part of the first cohort.

Part of her reason for wanting to earn her doctorate was to help share about Montessori education.

Montessori education does not compartmentalize education but builds on it.

“I’ve learned so much being a teacher,” Van Fleet said, who is taking a sabbatical from a private Montessori school to earn her doctorate. “I teach all subject matters. I have been with some of my students for three to six years. We have become a community. It just works beautifully.”

India French-Adams, of Charlotte, N.C., head of school at the Phoenix Montessori School in Huntsville, N.C., said she had been searching for a way to continue her education and was delighted to learn UWRF was starting a doctoral program.

“This allows me to learn more,” she said. “It’s exciting to be in a cohort of people who are on the creative edge. The content is very intellectual, rich and thought-provoking.”

“It’s been a great experience,” Foster said. “We are co-creating as we go along. It’s about making positive change.”

Sharp agreed, noting they shared similar interests and articles on the class they were teaching together.

“This has been so much fun,” Sharp said, noting she believes the doctoral program will help set the standard in Montessori education.