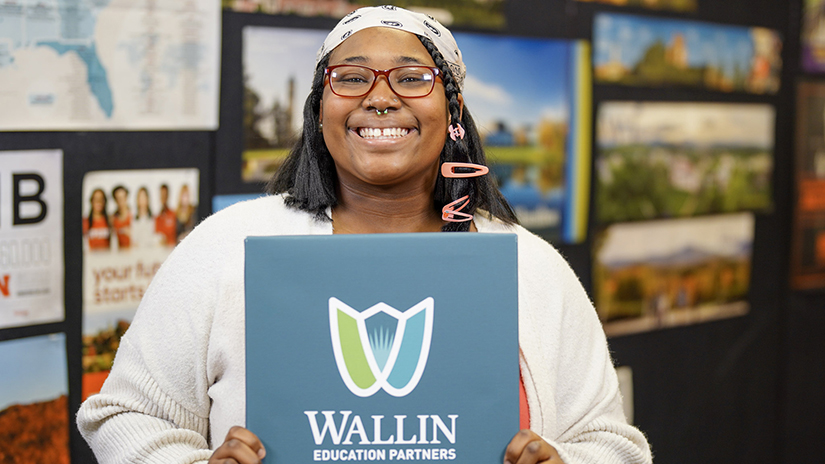 Student excited about first year at UWRF, becoming a teacher

July 21, 2022 – Erin Tetter was working her after-school job at Davanni’s Pizza and Hot Hoagies in the Twin Cities when a man came in wearing a University of Wisconsin-River Falls shirt.

Turns out the man was an alum of UWRF and an English teacher.

“He sold me on the school in five minutes,” Tetter recalled. “He was talking about the education program at UWRF and how they help set you up with a job after you graduate.”

Being a teacher is what Tetter dreams of doing once she graduates from college. She is majoring in elementary education with a minor in Spanish at UWRF.

“When I was younger, I always had this imagery of me being a teacher,” Tetter said. “I really like to help people and want to help them learn things. I’ve always wanted to be the teachers I see in my schools. I want to help others and be there for them like my teachers have been for me. I want to be a teacher for kids who look like me and need a role model in their lives.”

While at Harding High School in St. Paul, Minn., Tetter had a choir teacher, Natalia Romero Arbeláez, who inspired Tetter to succeed.

“If it wasn’t for her, I wouldn’t be where I am,” Tetter said. Tetter graduated from Harding in June.

College was always part of Tetter’s plans. After meeting the UWRF alum, and being accepted at UWRF, Tetter did not apply to any other schools.

“It seems homelike, and it will be a good fit for me,” Tetter said of UWRF. 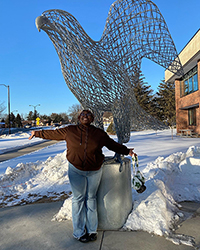 Even though she is thrilled to attend UWRF, after getting her acceptance letter, Tetter’s next thought was how to pay for college.

She began searching for scholarships. Her high school guidance counselor encouraged her to apply for a scholarship with Wallin Education Scholars, a Twin Cities nonprofit.

An online video created by Wallin shows Tetter and other students as they sat down to make a video about their plans after graduation. At one point, Tetter is handed a card telling her she was awarded a scholarship of $16,000.

Tetter broke into tears after reading the card.

“I have struggled my whole life with money,” Tetter said in the video. “I haven’t been able to do a lot of things that other people are able to. Being able to receive this scholarship just means the absolute world to me. I get to go do what I want,” she added, wiping tears from her eyes.

Potential scholars are decided based on many factors, but not just those in the typical scholarship application, said Wallin Manager of Marketing and Alumni Relations Jean Carlos Diaz in an interview with Minnesota Public Radio. It is an accumulation of not just what students were involved in but what was important to them.

“We take into account the whole student, not just activities but if they had a job or had to take care of their family,” Diaz said. “We want students who are engaged in their world, not just academics, to help us build more equitable communities.”

In addition to the scholarship, each scholar is assigned an adviser through Wallin that meets with them regularly and monitors their academic progress.

Wallin’s mission is “to ensure college and career success for high potential students from low-income backgrounds, and through our efforts help build diverse, equitable and vibrant communities.”

Tetter has toured UWRF twice and just knows it is the right fit for her. She is slated to attend orientation on campus August 17 and will move into Crabtree Hall, a residential hall, to start with the Aspire Program on August 28. Aspire is designed for first-year students and new transfer students to get paired with a student mentor who helps support them through their first year of college to help them connect to the community and resources. Classes start at UWRF on Wednesday, Sept. 7.

“I am looking forward to getting moved in on campus, finding my classes, getting through the first-week jitters and make friends,” Tetter said.