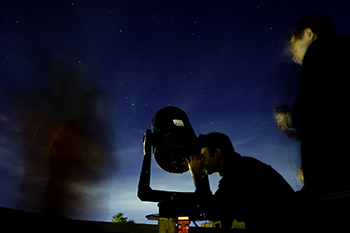 The first stargazing session on Tuesday, Feb. 24, beings with a talk, "Cosmographics:  Images of the Cosmos Over Time" by physics Professor Eileen Korenic at 8 p.m. in 271 Centennial Science Hall. Then, if the sky is clear, a telescope viewing session will follow at 8:30 p.m. on the third floor observation deck. Jupiter should be visible as well as a waxing crescent moon.

A faculty member and/or student will staff each telescope and be available to answer questions. Objects to be seen in the telescopes include planets, globular clusters, open clusters, nebulae, galaxies, moons, and double stars.

To verify that the sky is clear enough for viewing, call 715-425-3560 after 6 p.m. or visit www.uwrf.edu/PHYS/Schedule.cfm. The talks, set for 8 p.m., will go on as scheduled regardless of the weather.

Since the viewing dome is unheated and the observation deck is outside, visitors should dress appropriately for the weather. The viewings and talks are suitable for all ages.

Other viewings this spring include: